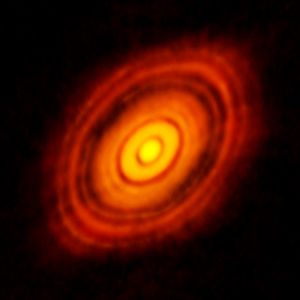 Protoplanetary disks are thought to be thin structures. They have mass that is much smaller than the young star in the center.

All content from Kiddle encyclopedia articles (including the article images and facts) can be freely used under Attribution-ShareAlike license, unless stated otherwise. Cite this article:
Protoplanetary disk Facts for Kids. Kiddle Encyclopedia.