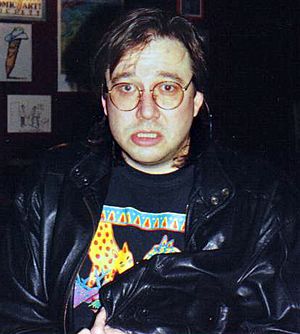 William 'Bill' Hicks (16 December 1961 - 26 February 1994) was an American stand-up comedian known for his controversial act which made fun of religion and politics amongst other areas. Since then, many other stand-up comedians in the United States and United Kingdom have said they have been very influenced by his work, which is still very popular today.

Hicks was born in Valdosta, Georgia and raised in Houston, Texas. He died of pancreatic cancer in Little Rock, Arkansas.

All content from Kiddle encyclopedia articles (including the article images and facts) can be freely used under Attribution-ShareAlike license, unless stated otherwise. Cite this article:
Bill Hicks Facts for Kids. Kiddle Encyclopedia.