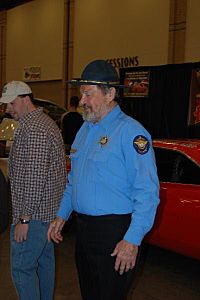 Otis Burt "Sonny" Shroyer, Jr. (born August 28, 1935) is an American actor and singer. He is known for his role as Deputy Sheriff Enos Strate in the television series The Dukes of Hazzard. He also starred in a short-lived spin-off called Enos. He was born in Valdosta, Georgia.

All content from Kiddle encyclopedia articles (including the article images and facts) can be freely used under Attribution-ShareAlike license, unless stated otherwise. Cite this article:
Sonny Shroyer Facts for Kids. Kiddle Encyclopedia.