The region has two official name: Regione Autonoma Valle d'Aosta (in Italian) and Région Autonome Vallée d'Aoste (in French). The capital is Aosta.

This is the smallest region in Italy with an area of 3,260.9 km2 (1,259.0 sq mi), and a population of about 126,883. It is the only Italian region which has no provinces. The regional government has taken all the administrative functions of a province. The region is divided into 74 comuni.

It limits to the north with Switzerland (Canton Valais), to the west with France (region Auvergne-Rhône-Alpes), to the south and east with the Italian region of Piedmont.

The Valle d'Aosta is a small valley, the valley of the Dora Baltea river, with some smaller side valleys, in the middle of the Alps, surrounded by four of the tallest mountains throughout Italy and Europe:

In the Valle d'Aosta, a region with many mountainous and close to borders with other countries, the mountain passes are very important. Even if now there some tunnels, they are important not only from a historical and geographical perspective, but also traditional and tourism.

The main mountain passes between the Val d'Aosta and other valleys are:

The southern part of the territory is occupied by the Gran Paradiso National Park, created in 1922 to protect plants and animals in danger of extinction.

The valleys were made by glaciers moving at a time when the entire region was covered by them. Currently, glaciers occupy only the highest peaks.

The Dora Baltea (French: Doire Baltée) river flows along the whole Valle d'Aosta, from the northwest to the southeast; it is 160 km (99 mi) long and is a tributary of the Po river. 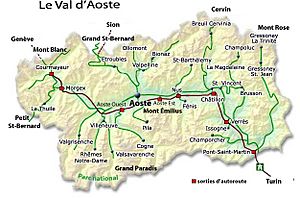 Map of Valle d'Aosta (in French).

The 10 comuni of the Valle d'Aosta with the higher populations (January 2017) are:

A person from the Valle d'Aosta is called a Valdotian (Italian: Valdostano/a, French: Valdôtain).

Evolution of the population in the Aosta Valley

Italian and French are the region's official languages and are used for the regional government's acts and laws, though Italian is much more widely spoken in everyday life. Of the population of the valley 96% speaks Italian as either a first or second language. Of the population 70% speaks French as either first or second language. School education is given equally in both Italian and French.

The regional language is a dialect of Franco-Provençal called Valdôtain (locally, patois). It is spoken as native tongue and as second language by about 58% of the population, according to a poll taken by the Fondation Émile Chanoux in 2002. The residents of the villages of Gressoney-Saint-Jean, Gressoney-La-Trinité and Issime, in the Lys Valley, speak two dialects of Walser German origin called Titsch and Töitschu respectively.

All content from Kiddle encyclopedia articles (including the article images and facts) can be freely used under Attribution-ShareAlike license, unless stated otherwise. Cite this article:
Valle d'Aosta Facts for Kids. Kiddle Encyclopedia.