The Alpine marmot is a species of marmot (a rodent). It can be found in mountain regions of central and southern Europe. It is the third-largest rodent on the European continent. The Eurasian beaver and the Crested porcupine are both larger than it.

Alpine marmots mature in their third year. For this reason, marmots live in family groups of up to twenty animals. Alpine marmots have been around since the ice age. Today, their range is limited to the higher mountain regions.

Alpine marmots live at heights between 800 and 3,200 metres in the Alps, Carpathians, Tatras, the Pyrenees and Northern Apennines in Italy. They were reintroduced with success in the Pyrenees in 1948, where the alpine marmot had disappeared at end of the Pleistocene epoch.

They are excellent diggers, able to penetrate soil that even a pickaxe would have difficulty with, and spend up to nine months per year in hibernation. 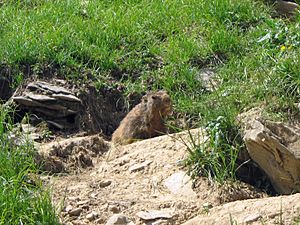 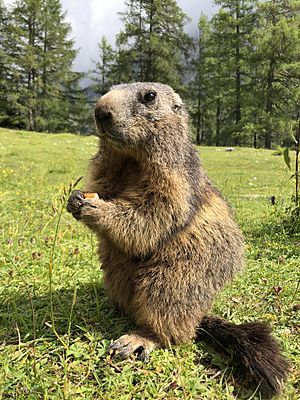 As its name suggests, the alpine marmot ranges throughout the European Alps, ranging through alpine areas of France, Italy, Switzerland, Germany, Slovenia and Austria. They have also been introduced elsewhere with sub-populations in the Pyrenees, France's Massif Central, Jura, Vosges, Black Forest, Apennine Mountains, and the Romanian Carpathians.

Marmots are abundant in their core population; in the Romanian Carpathians, for example, the population is estimated at 1,500 individuals. Alpine marmots prefer alpine meadows and high-altitude pastures, where colonies live in deep burrow systems situated in alluvial soil or rocky areas.

Marmots may be seen "sun bathing", but actually this is often on a flat rock and it is believed they are actually cooling and possibly this is a strategy to deal with parasites. Marmots are temperature sensitive and an increase in temperature can cause habitat loss for the species as a whole. 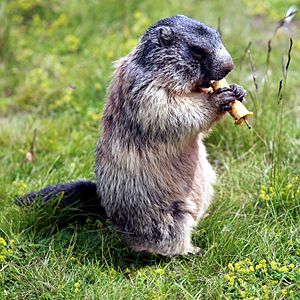 Alpine Marmot at the Grimselpass

Alpine marmots eat plants such as grasses and herbs, as well as grain, insects, spiders and worms. They prefer young and tender plants over any other kind, and hold food in their fore-paws while eating.

They mainly emerge from their burrows to engage in feeding during the morning and afternoon, as they are not well suited to heat, which may result in them not feeding at all on very warm days. When the weather is suitable, they will consume large amounts of food in order to create a layer of fat on their body, enabling them to survive their long hibernation period. 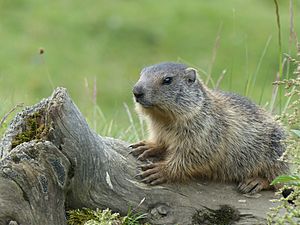 When creating a burrow, they use both their fore-paws and hind feet to assist in the work—the fore-paws scrape away the soil, which is then pushed out of the way by the hind feet. If there are any stones in the way, the alpine marmot will remove them with its teeth provided that the stones aren't too large.

"Living areas" are created at the end of a burrow, and are often lined with dried hay, grass and plant stems. Any other burrow tunnels that go nowhere are used as toilet areas. Once burrows have been completed, they only host one family, but are often enlarged by the next generation, sometimes creating very complex burrows over time.

Each alpine marmot will live in a group that consists of several burrows, and which has a dominant breeding pair. Alpine marmots are very defensive against intruders, and will warn them off using intimidating behavior, such as beating of the tail and chattering of the teeth, and by marking their territory with their scent. 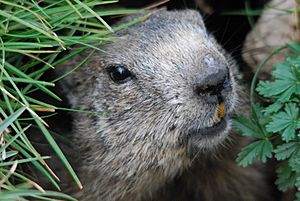 One can often see an alpine marmot "standing" while they keep a look-out for potential predators or other dangers. Warnings are given, by emitting a series of loud whistles, after which members of the colony may be seen running for cover.

The mating season for alpine marmots occurs in the spring, right after their hibernation period comes to a close, which gives their offspring the highest possible chance of storing enough fat to survive the coming winter. Alpine marmots are able to breed once they reach an age of two years. Once the female is pregnant, she will take bedding materials (such as grass) into the burrow for when she gives birth after a gestation period of 33–34 days. 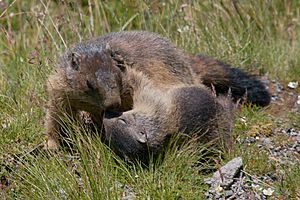 A pair of Alpine marmot

Each litter consists of between one and seven babies, though this number is usually three. The babies are born blind and will grow dark fur within several days. The weaning period takes a further forty days, during which time the mother will leave the young in the burrow while she searches for food. After this period, the offspring will come out of the burrow and search for solid food themselves.

Their fur becomes the same color as other alpine marmots by the end of the summer, and after two years they will have reached their full size. If kept in captivity, alpine marmots can live up to 15–18 years. 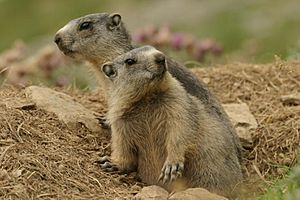 Introduced alpine marmots in the Pyrenees

As the summer begins to end, alpine marmots will gather old stems in their burrows in order to serve as bedding for their impending hibernation, which can start as early as October. They seal the burrow with a combination of earth and their own faeces. Once winter arrives, alpine marmots will huddle next to each other and begin hibernation, a process which lowers their heart rate to five beats per minute and breathing to 1–3 breaths per minute, which uses up their stored fat supplies slowly, and usually allows them to survive the winter. Some alpine marmots will starve to death due to their layer of fat running out; this is most likely to happen in younger individuals. 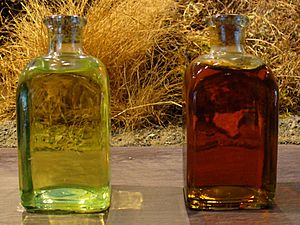 Alpine marmots used to be widely hunted due to the belief that their fat would ease rheumatism when rubbed on the skin and also for eating. Hunting of the alpine marmot still occurs for sport as well as its fat. Hunting is not a danger to the species as long as well regulated, as they are relatively slow at breeding.

In general the alpine marmot is currently not in danger of extinction, but certain sub-populations of marmot may be threatened such as those in the Jura and in Germany. There is a population in Rodna that is very small and threatened by poaching.

All content from Kiddle encyclopedia articles (including the article images and facts) can be freely used under Attribution-ShareAlike license, unless stated otherwise. Cite this article:
Alpine marmot Facts for Kids. Kiddle Encyclopedia.