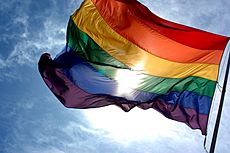 Gay pride, or LGBT pride, is a positive stand against hatred, discrimination or violence toward lesbian, gay, bisexual and transgender people.

Gay pride builds trust and rights. It promotes the LGBT as a group. It also honors sexual orientation of all kinds and difference in gender.

it is also a remembrance for those who lost their lives due to gay bashing, and the fact it was illegal, it also shows respect to those who still cant live their lives freely in countries where it is either illegal or just very discriminated against.

All content from Kiddle encyclopedia articles (including the article images and facts) can be freely used under Attribution-ShareAlike license, unless stated otherwise. Cite this article:
Gay pride Facts for Kids. Kiddle Encyclopedia.