Kids Encyclopedia Facts
This page is about Vector (biology). For other uses, see Vector.

A vector in biology is an animal on or in which a small living thing gets transported. The vector gets no benefit and sometimes loses fitness by the arrangement.

The term is most used for the transport of parasites and agents of disease. So, deadly diseases, such as malaria and dengue fever, are carried by some mosquitoes.

The study of vectors gives us knowledge about the life cycle of parasitic diseases, and this helps us control those diseases. 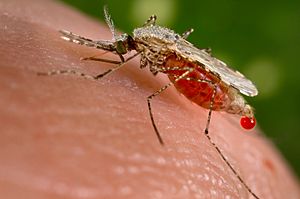 An Anopheles stephensi mosquito shortly after obtaining blood from a human (the droplet of blood is expelled as a surplus). This mosquito is a vector of malaria. Fighting mosquitos in areas with malaria will fight malaria effectively.

All content from Kiddle encyclopedia articles (including the article images and facts) can be freely used under Attribution-ShareAlike license, unless stated otherwise. Cite this article:
Vector (biology) Facts for Kids. Kiddle Encyclopedia.