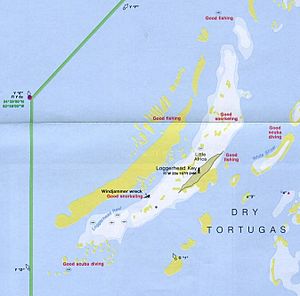 A basic map of Loggerhead Key 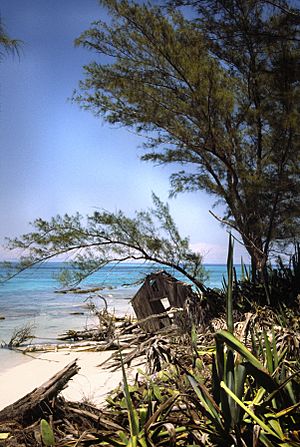 An abandoned building on Loggerhead Key

Loggerhead Key is an uninhabited tropical island within the Dry Tortugas group of islands inside the Gulf of Mexico. At approximately 49 acres (19.8 hectares) in size, it is the largest island of the Dry Tortugas. Despite being uninhabited, the island receives visitors, such as day visitors and campers. The island only has a few built structures, including the Dry Tortugas Light and a lightkeeper's house that was constructed in the 1920s. The island has drinking water derived using desalination technology and solar power. The Carnegie Marine Biological Laboratory operated on Loggerhead Key from 1904 to 1939.

Loggerhead Key has a tropical savannah climate (Aw). Summers are long, hot and year round. The rainy season lasts from June to October with light rainfall when compared to the rest of Florida. Loggerhead Key is likely the driest place in Florida with the lowest amount of precipitation inches and precipitation days, being far from the Florida mainland where afternoon thunderstorms form with ease over the land.

Loggerhead Key is named after the loggerhead sea turtle, an endangered marine reptile and species of sea turtle with a cosmopolitan distribution throughout the world.

The flora of Loggerhead Key includes mangrove, coconut palms, geiger trees, morning glory, sea lavender and cactus. In the 1840s, the island was covered with white buttonwood trees, which were burned or cut down by island inhabitants. Bay cedar existed on the island in the early 1900s.

Fauna of Loggerhead Key includes sea turtles, which are monitored by park rangers with the Dry Tortugas National Park to document nesting and hatching rates. The loggerhead sea turtle is also present on the island. In August 2016, a National Park marine biologist stated that 113 loggerhead turtle nests existed on the island at that time. This was the highest recorded nest rate compared previous years.

The island also has brown pelicans.

In 1972, hundreds of rhesus macaque monkeys were brought from India to Loggerhead Key by Charles River Laboratories. This was done to provide the monkeys a place to breed, to supply the animals for medical research laboratory experiments. Around 1,322 of the monkeys existed on the island between 1987 and 1990. 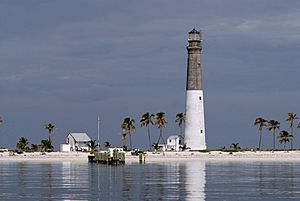 The Dry Tortugas Light is a lighthouse located on Loggerhead Key. It began operations in 1858 and was decommissioned in 2014.

The Carnegie Marine Biological Laboratory, also referred to as the Tortugas Laboratory, was a marine biology laboratory and research facility constructed on the northern end of Loggerhead Key that operated from 1904 to 1939. It was constructed and operated by the Carnegie Institution of Washington. The Carnegie Marine Biological Laboratory performed some of the first research on Western hemisphere mangroves and coral reefs, marine life at the Loggerhead Key coral reefs, other marine life, and also performed underwater color and black-and-white photography there. Due to safety concerns regarding the hurricane season, research only occurred in the late spring and summer months.

All content from Kiddle encyclopedia articles (including the article images and facts) can be freely used under Attribution-ShareAlike license, unless stated otherwise. Cite this article:
Loggerhead Key Facts for Kids. Kiddle Encyclopedia.