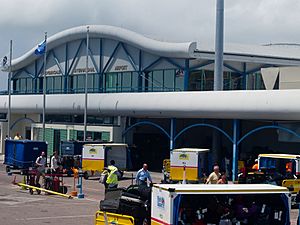 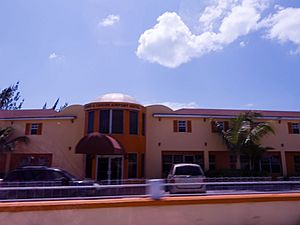 The island is served by the Providenciales International Airport.

There is no public transportation on the island.

As recently as 1964, Providenciales did not have a single wheeled vehicle. Roads, water, telephones, and electricity were also absent. The original developer, Provident, Ltd, had shuttle flights from Florida (for a real estate buying program) two times a week in a World War II DC-3 plane and the only hotel was the Third Turtle Inn built by them in 1967.

After a large investment on Grace Bay Beach by Club Med, the island's first large hotel and casino complex opened in 1984 and touched off a development boom. Resorts included Ocean Club, Turquoise Reef (current Seven Stars), North Beach (now Beaches), and Grace Bay Club. As of the year 2000, Provo is the most tourist-oriented and developed of the Turks and Caicos Islands, boasting many resort hotels and an 18-hole golf course. The island has recently become popular with retirees from around the world, kindling a boom of residential development. Grace Bay has seen many luxury condos built on its shores, however, the settlements of Turks Islanders still provide a local flair to the island.

The diving is world class due to the coral reef surrounding the island.

The island is close to a common migration route for the humpback whale. Providenciales is surrounded by uninhabited cays that are easily reached by chartered boat or excursion.

The resorts on Providenciales are primarily centred on 5 miles (8.0 km) long Grace Bay. Apart from the beaches, the island's charm lies in its rugged hills and ridges, which are carpeted with prickly pear cactus and scrub (some say the Turks and Caicos gets its name from the indigenous Turk's head cactus common in the islands).

Long Bay Beach, on the southern, windward side of the island is still largely undeveloped save for a large luxury resort on the northern tip of the beach. Due to its steady wind and relatively isolated location, Long Bay Beach is rapidly becoming a kiteboarding destination in the Caribbean.

Grace Bay has grown to be a major tourist destination with many hotels and condominiums built on the beachfront. Beginning with Club Med in the 1984 and Grace Bay Club in 1993, development continued in the late 1990s with The Sands, Point Grace, and Ocean Club West, and again in the 2000s with The Palms (formerly Regent Palms), Gansevoort and West Bay Club.

Outside of Grace Bay, Amanyara was built in the 2000s in the secluded Northwest Point area, and the Shore Club opened in 2017 in the Long Bay Area.

Opportunities for sightseeing and hiking are reasonable. There are remnants of Caribbean piracy at Osprey Rock and Sapodilla Hill, and the ruins of Cheshire Hall, a 1790s plantation house constructed by British loyalists, are also notable. 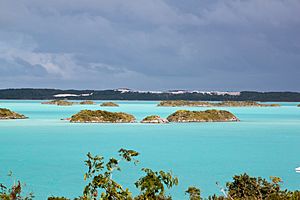 The western half of Providenciales is mostly barren wilderness, home to the island's best natural attraction, Chalk Sound National Park. The park is a 3 miles (4.8 km) long bay southwest of Downtown. The colour of the water is a uniform turquoise and studded with countless mushroom-like tiny islets. Also on the western part of the island is Northwest Point Marine National Park, which extends to nearby reefs and several saline lakes that attract breeding and migrant waterfowl. 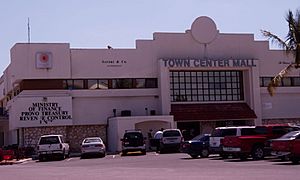 The major road, the Highway, runs east–west from Downtown to Leeward. Most of the island's services are near the Highway, including shopping plazas.

The communities of Downtown and Kew Town are located near Providenciales International Airport. The town of Wheeland is in the northwest corner of the island.

Before Provo became a popular tourist destination, there were three small centers of population: Blue Hills, The Bight (on Grace Bay) and Five Cays. Now many houses have been built, predominantly in the east and south, with larger communities at Leeward, Long Bay and Chalk Sound, as well as expansion of the original three settlements. There are also pockets of makeshift shacks interspersed among the more upscale residences.

All content from Kiddle encyclopedia articles (including the article images and facts) can be freely used under Attribution-ShareAlike license, unless stated otherwise. Cite this article:
Providenciales Facts for Kids. Kiddle Encyclopedia.