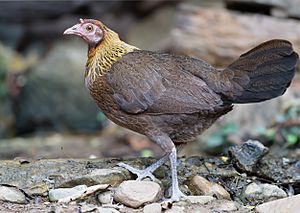 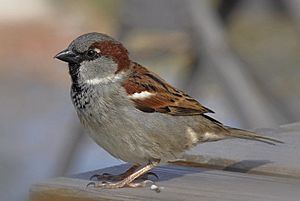 Neognaths (Neognathae) are birds within the subclass Neornithes of the class Aves. The Neognathae include virtually all living birds; exceptions being their sister taxon (Palaeognathae), which contains the tinamous and the flightless ratites.

There are nearly 10,000 species of neognaths. The earliest fossils are known from the very end of the Cretaceous but molecular clocks suggest that neognaths originated sometime in the first half of the Late Cretaceous about 90 million year ago. Since then, they have undergone adaptive radiation producing the diversity of form, function, and behavior that we see today. It includes the order Passeriformes (perching birds), the largest clade of land vertebrates, containing some 60% of living birds and being more than twice as speciose as rodents and about five times as speciose as Chiroptera (bats), which are the largest clades of mammals. There are also some very small orders, usually birds of very unclear relationships like the puzzling hoatzin.

The neognaths have fused metacarpals, an elongate third finger, and 13 or fewer vertebrae. They differ from the Palaeognathae in features like the structure of their jawbones. "Neognathae" means "new jaws", but it seems that the supposedly "more ancient" paleognath jaws are among the few apomorphic (more derived) features of the Palaeognaths, meaning that the respective jaw structure of these groups is not informative in terms of comparative evolution.

All content from Kiddle encyclopedia articles (including the article images and facts) can be freely used under Attribution-ShareAlike license, unless stated otherwise. Cite this article:
Neognathae Facts for Kids. Kiddle Encyclopedia.