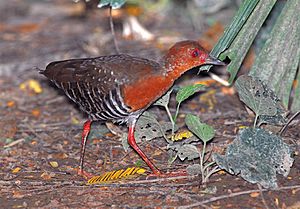 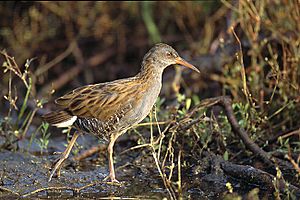 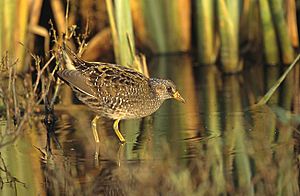 The rails, or Rallidae, are a large family of small to medium-sized birds. The rails are related to cranes, and both are in the order Gruiformes.

The family is diverse, and includes the crakes, coots, and gallinules. Many species are associated with wetlands, although the family is found in every terrestrial habitat except dry deserts, polar regions and alpine areas above the snow line. The Rallidae are found on every continent except Antarctica. There are numerous island species. The most common habitats are marshland or dense forest. They like dense vegetation.<Hor/>

There are many rails on islands, and they are often flightless.

The wings of all rails are short and rounded. Their flight is not powerful, but can continue for long periods, and many species migrate annually. The weakness of their flight means they are easily blown off course, so they are common vagrants. This has led them to colonize many isolated oceanic islands. Furthermore, these birds often prefer to run rather than fly, especially in dense shrub or woodland habitats. Some are also flightless at some time during their moult period.

Many island rails are flightless because on a small island without threatening predators they do not need to fly or move long distances. Flight makes intense demands, with the keel and flight muscles taking up to a quarter of a bird's weight. Reducing the flight muscles lowers the metabolic demands, and reduces the flightless rail's energy needs. For this reason, flightlessness makes it easier to survive and colonize an island where resources may be limited. Flightlessness can evolve extremely rapidly in island rails; it took as little as 125,000 years for the Laysan Rail to lose the power of flight and evolve the reduced, stubby wings only useful to keep balance when running quickly.

All content from Kiddle encyclopedia articles (including the article images and facts) can be freely used under Attribution-ShareAlike license, unless stated otherwise. Cite this article:
Rallidae Facts for Kids. Kiddle Encyclopedia.