The trogons and quetzals are birds in the order Trogoniformes which has only one family, the Trogonidae. There are 39 living species in seven genera.

The fossil record of the trogons dates back 49 million years to the mid-Eocene. The word "trogon" is Greek for "nibbling" and refers to the fact that these birds gnaw holes in trees to make their nests.

Trogons are residents of tropical forests worldwide. The greatest diversity is in the Neotropics, where four genera, with 24 species occur. The genus Apaloderma has the three African species. The genera Harpactes and Apalharpactes, with twelve species, live in southeast Asia.

They feed on insects and fruit. Their broad bills and weak legs reflect their diet and arboreal habits. Although their flight is fast, they do not fly long distances. Trogons are generally not migratory. They have soft, often colourful, feathers with distinctive male and female plumage. They are the only type of animal with a heterodactyl toe arrangement. They nest in holes dug into trees or termite nests, laying 2–4 white or pastel-coloured eggs. 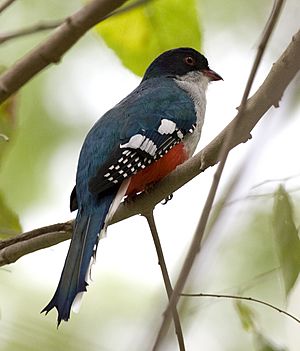 All content from Kiddle encyclopedia articles (including the article images and facts) can be freely used under Attribution-ShareAlike license, unless stated otherwise. Cite this article:
Trogon Facts for Kids. Kiddle Encyclopedia.