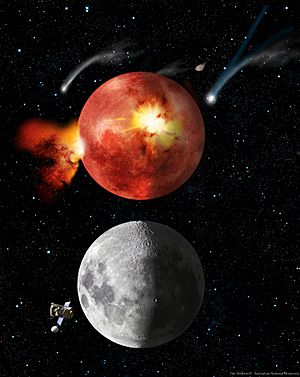 The Late Heavy Bombardment (LHB) or lunar cataclysm, is a period of time about 4.1 to 3.8 billion years ago. During this time, a large number of impact craters formed on the Moon. By inference the same thing happened on Earth, Mercury, Venus, and Mars as well.

The evidence for this event comes from the dating of lunar samples, which indicates that most impact melt rocks formed at that time. Many hypotheses have been suggested to explain how asteroidal or cometary material got into the inner solar system, but no consensus yet exists. One popular theory is that the gas giant planets migrated in orbit at this time, causing objects in the asteroid belt and/or Kuiper belt to be forced into orbits which reached the terrestrial planets.

Some think that the apparent clustering of impact melt ages near this time is an artifact of sampling.

All content from Kiddle encyclopedia articles (including the article images and facts) can be freely used under Attribution-ShareAlike license, unless stated otherwise. Cite this article:
Late Heavy Bombardment Facts for Kids. Kiddle Encyclopedia.