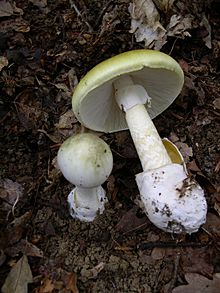 The genus Amanita contains a species of basidiomycete mushrooms, including some of the most toxic known. It is found worldwide.

This genus is responsible for approximately 95% of the fatalities resulting from mushroom poisoning, with the death cap accounting for about 50% on its own. The most potent toxin present in these mushrooms is amanitin, of which at least eight versions are known.

Amanita muscaria, commonly known as the fly agaric, is a psychoactive fungus. It is known as the fly agaric for its ability to kill houseflies when combined with milk. The reason for this is that flies are attracted to the milk because it is so sweet. When they drink the milk they feel the effects of the mushroom and begin to get intoxicated.

Amanita phalloides, commonly known as the death cap, is a deadly poisonous fungus, one of many in the genus Amanita. Widely distributed across Europe, A. phalloides forms ectomycorrhizas with various broadleaved trees. In some cases, death cap has been accidentally introduced to new regions with the cultivation of non-native species of oak, chestnut, and pine. The large fruiting bodies (mushrooms) appear in summer and autumn; the caps are generally greenish in color, with a white stipe (stem) and gills (underneath the cap).

One mushroom, if eaten, may destroy the liver and cause death. There is no antidote.p211

Their major toxic mechanism is the inhibition of RNA polymerase II, a vital enzyme in the synthesis of messenger RNA (mRNA), microRNA (miRNA), and small nuclear RNA (snRNA). Without mRNA, essential protein synthesis, and hence cell metabolism, grind to a halt and the cell dies.

The liver is the principal organ affected, as it is the organ which is first encountered after absorption in the gastrointestinal tract, though other organs, especially the kidneys, are susceptible.p217 The RNA polymerase of Amanita phalloides is insensitive to the effects of amatoxins, so the mushroom does not poison itself.

All content from Kiddle encyclopedia articles (including the article images and facts) can be freely used under Attribution-ShareAlike license, unless stated otherwise. Cite this article:
Amanita Facts for Kids. Kiddle Encyclopedia.