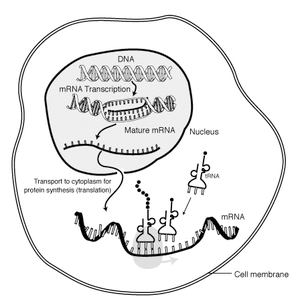 RNA is transcribed in the nucleus; once completely processed, it is transported to the cytoplasm and translated by the ribosome (shown in very pale grey behind the tRNA).

Protein biosynthesis (synthesis) is when cells build proteins. The term is sometimes used to refer only to protein translation but more often it refers to a multi-step process.

Amino acids are either synthesised or eaten in food. Then, after the transcription of polypeptide genes, the amino acids are put together. This is done by translation and RNA splicing which produces messenger RNAs. The splicing process produces the final proteins, which then fold up into their protein structure. Then they can function. The plural is used here because, with most genes, the splicing process produces more than one final working protein. One particular Drosophila gene (DSCAM) can be alternatively spliced into 38,000 different mRNA.

Protein biosynthesis differs between prokaryotes and eukaryotes, though parts of the process are the same in both.

All content from Kiddle encyclopedia articles (including the article images and facts) can be freely used under Attribution-ShareAlike license, unless stated otherwise. Cite this article:
Protein biosynthesis Facts for Kids. Kiddle Encyclopedia.