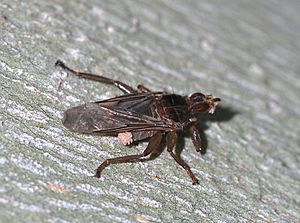 Mites get transport on a fly (Pseudolynchia canariensis)

Commensalism is a type of relationship between two organisms, where members of one species gain benefits while those of the other species neither benefit nor are harmed. This is in contrast with mutualism, in which both organisms benefit from each other. For example, some birds live in holes in trees. Does this damage the tree? Mites, which cannot fly, often hitch a ride on insects. Does this affect the insect's fitness?

Orchids, mosses, and lichens all grow on tropical trees. They need sunlight, and by being higher up they get to the sunlight. All that can be said for sure is that the trees continues to live and reproduce, and so it is assumed that these epiphytes do not affect their host plant.

Pierre-Joseph van Beneden (1809–1894) introduced the term into evolutionary biology and ecology in the 1870s.

Amensalism is a symbiotic relationship in which one organism is harmed or inhibited and the other is unaffected. Examples of amensalism include the shading out of one plant by a taller and wider one and the inhibition of one plant by the secretions of another (known as allelopathy).

All content from Kiddle encyclopedia articles (including the article images and facts) can be freely used under Attribution-ShareAlike license, unless stated otherwise. Cite this article:
Commensalism Facts for Kids. Kiddle Encyclopedia.