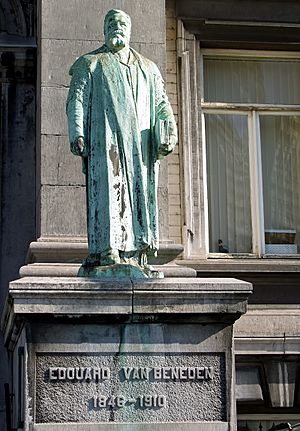 Edouard Joseph Marie Van Beneden (Leuven, 5 March 1846 – Liège, 28 April 1910), cytologist and marine biologist. He was professor of zoology at the University of Liège. He contributed to cytology and genetics by his work on the roundworm Ascaris. In this work he discovered how chromosomes combined during meiosis, during the production of gametes.

Beneden discovered, with Walther Flemming and Eduard Strasburger, the essential facts of mitosis. In contrast to meiosis, the double (diploid) set of chromosomes in daughter cells is identical to those in the parent cells. Excepting rare accidents, there is no change in the genetic apparatus. In meiosis, only one set of chromosomes ends up in each gamete, a condition called haploid.

All content from Kiddle encyclopedia articles (including the article images and facts) can be freely used under Attribution-ShareAlike license, unless stated otherwise. Cite this article:
Edouard van Beneden Facts for Kids. Kiddle Encyclopedia.