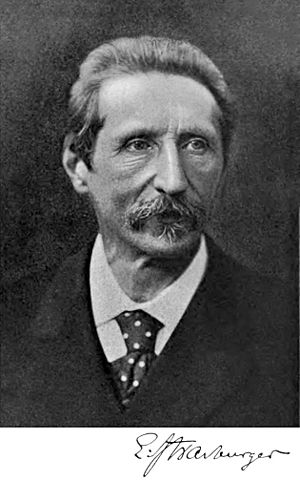 Eduard Adolf Strasburger (1 February 1844 in Warsaw – 19 May 1912 in Bonn) was a German professor who was one of the most famous botanists of the 19th century.

Strasburger was a founder of the famous Lehrbuch der Botanik für Hochschulen (Textbook of Botany), which first appeared in 1894. He was the first to provide an accurate description of the embryonic sac in gymnosperms (such as conifers) and angiosperms (flowering plants), along with demonstrating double-fertilization in angiosperms. He came up with one of the modern laws of plant cytology: "New cell nuclei can only arise from the division of other nuclei", and originated the terms cytoplasm and nucleoplasm.

At about the same time as Walther Flemming, and Edouard van Beneden, he worked out chromosome movement during mitosis in plant cells. His work on the upward movement of tree sap proved that the process was physical and not physiological.

He was awarded the Linnean Society's prestigious Darwin-Wallace Medal in 1908.

All content from Kiddle encyclopedia articles (including the article images and facts) can be freely used under Attribution-ShareAlike license, unless stated otherwise. Cite this article:
Eduard Strasburger Facts for Kids. Kiddle Encyclopedia.