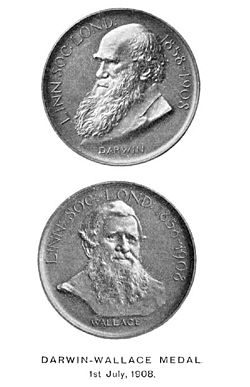 The Darwin–Wallace Medal is awarded by the Linnean Society of London for "major advances in evolutionary biology".

The medals have been awarded every 50 years, beginning in 1908. That year marked 50 years after the joint presentation of papers by Charles Darwin and Alfred Russel Wallace. These were On the Tendency of Species to form Varieties; and On the Perpetuation of Varieties and Species by Natural Means of Selection. The papers were both about natural selection as the main cause of evolution. The papers were presented to the Linnean Society of London on 1 July 1858.

Wallace was one of the first to get of the medal. In his case it was made of gold, rather than the silver versions given to the six other medallists. However, in 2008 the Linnean Society announced that due to the continuing importance of evolutionary research, the medal will be awarded on an annual basis beginning in 2010.

The first award was of a gold medal to Alfred Russel Wallace, and silver medals to six other distinguished scientists:

13 silver medals were awarded, including 2 posthumously:

All content from Kiddle encyclopedia articles (including the article images and facts) can be freely used under Attribution-ShareAlike license, unless stated otherwise. Cite this article:
Darwin–Wallace Medal Facts for Kids. Kiddle Encyclopedia.