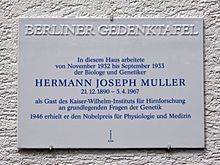 Hermann Joseph Muller, generally known as H. J. Muller, (21 December 1890 – 5 April 1967) was an American geneticist, educator, and Nobel Prize winner. He was best known for his work on the physiological and genetic effects of radiation, as well as his outspoken political beliefs. Muller frequently warned of the long-term dangers of radioactive fallout from nuclear explosions.

Muller's life was as extraordinary as could be imagined. Born in New York City, he got his PhD at CalTech in Morgan's Drosophila fly lab. He next worked at Rice University, and then spent twelve years at the University of Texas. Then he moved to Berlin in 1932, then to Leningrad (St Petersburg), and then to Moscow. In all these places he organised a genetics lab, and sometimes taught as well. Then arose the scientific charlatan Lysenko, who saw to it that genuine genetics scientists came under the disapproval of Stalin. Once again Muller moved, this time to Edinburgh, with 250 strains of Drosophila, then finally back to the United States in 1940, where he became an advisor to the Manhattan Project. He became Professor of Zoology at Indiana University.

Muller's Nobel Prize in Physiology or Medicine in 1946 was "for the discovery that mutations can be induced by X-rays". By then the real interest lay in the same effects caused by gamma rays from nuclear testing. Muller was a wholehearted enthusiast for eugenics, socialism, atheism and other relatively unpopular ideas, but his real contribution was to genetics. One reputable source writes of him:

"Muller's contributions dominate the 1920s and 1930s. The variety of genetic tools he developed elevated Drosophila to an almost exclusive role in the study of the gene concept. It is almost impossible to read Muller's articles during those two decades without feeling overwhelmed by the quality of genius which characterises the analytical and projective treatment of his discoveries and experiments".

All content from Kiddle encyclopedia articles (including the article images and facts) can be freely used under Attribution-ShareAlike license, unless stated otherwise. Cite this article:
H. J. Muller Facts for Kids. Kiddle Encyclopedia.