Eugenics is the self direction of human evolution, logo of the second International Eugenics Congress, 1921

Eugenics is a social and political philosophy. It tries to influence the way people choose to have children, with the aim of improving the human species.

Eugenics rests on some basic ideas. The first is that, in genetics, what is true of animals is also true of man. The characteristics of animals are passed on from one generation to the next in heredity, including mental characteristics. For example, the behaviour and mental characteristics of different breeds of dog differ, and all modern breeds are greatly changed from wolves. The breeding and genetics of farm animals show that if the parents of the next generation are chosen, then that affects what offspring are born.

In the past, many ways were proposed for doing this, and even today eugenics means different things to different people. The idea of eugenics is controversial, because in the past it was sometimes used to justify discrimination and injustice against people who were thought to be genetically unhealthy or inferior. 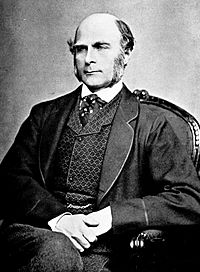 Modern eugenics was first invented in 1865 by Sir Francis Galton, a British scientist who was the cousin of Charles Darwin. Galton believed that intelligence and talent were hereditary and were passed from parent to their children. Based on this, he thought that people could be bred to be smarter, just like animals were bred to be larger or smaller. Galton thought the best way to do this was to learn more about heredity, and also to tell people that they should only marry people who were smart and strong. Galton chose the name "Eugenics" because it was very similar to the Greek for "well born".

Galton developed the idea of eugenics throughout his life. He understood the two types of eugenics, positive and negative eugenics. One problem, which critics brought up, is the difficulty of agreeing on who is a healthy person, genetically speaking, and who is an inferior person. Obviously, opinions differ.

Though there are few people who openly advocate eugenics today, many people wonder what improvements in genetic technologies will mean in the future.

Genetic counselling exists, where parents can get information about their heredity and even prevent the birth of a child if it has a risk of hereditary illness.

All content from Kiddle encyclopedia articles (including the article images and facts) can be freely used under Attribution-ShareAlike license, unless stated otherwise. Cite this article:
Eugenics Facts for Kids. Kiddle Encyclopedia.