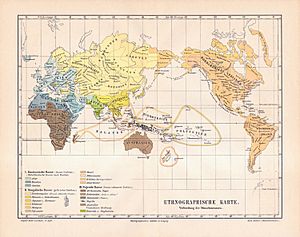 The 4th edition of Meyers Konversationslexikon (Leipzig, 1885-1890) shows the Caucasian race (in blue) as being made up of Aryans, Semites and Hamites. Aryans are further subdivided into European Aryans and Indo-Aryans. The people called "Indo-Aryans" on this 1890 map are today known as Indo-Iranians, and the word "Indo-Aryan" is only used today for those Indo-Iranians from northern India.

The Aryan race is an idea formed in the 19th and early 20th century. The term "Aryan" derives from the name of a group of hypothetical people in ancient Persia and India, who spoke an indo-European language. It has been used to describe people of Iranian, Indian and European decent, but it were later mainly used to describe Germanic peoples because of emerging theories about the Aryans.

The term Aryan comes from the ancient Sanskrit word ārya, which was a term used by Sanskrit speaking people to distinguish themselves from other races. The Iranians also used the terms, and the name Iran means "land of the Aryans". The idea of an Aryan race was first used as a category of people but was later used by occult movements such as Theosophy. It was also later used by Nazism and supremisism in racist ways.

The ideology of Nazism was based upon the idea of the Aryan race or Germanic peoples being a master race. The Nazi view of the Aryan race came from earlier racial theorists such as Arthur de Gobineau and Houston Stewart Chamberlain.

Theosophy, a mystical occult society founded by Helena Blavatsky believes that the Arabian people and the Jews are a part of the Aryan race. It is believed by Theosophists that the Arabians used the Semitic languages of the people around them. These people had moved to the area from Atlantis. Theosophists claim that the Jews began as a part of the Arabian subrace in what is now Yemen around 30,000 BC. They moved first to Somalia and then to Egypt where they lived until the time of Moses.

All content from Kiddle encyclopedia articles (including the article images and facts) can be freely used under Attribution-ShareAlike license, unless stated otherwise. Cite this article:
Aryan race Facts for Kids. Kiddle Encyclopedia.