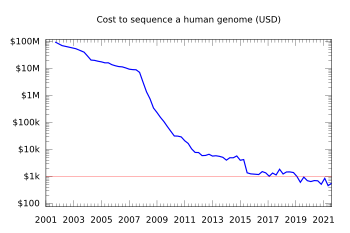 Genetic screening finds out genetic susceptibility to a particular disease. Genetic testing identifies differences in chromosomes, genes, or proteins. It allows the genetic diagnosis of vulnerabilities to inherited diseases. It can also be used to find out a child's parentage (genetic mother and father).

Genetic screening in a broader sense includes biochemical tests for the possible presence of genetic diseases, or mutant forms of genes associated with increased risk of developing genetic disorders. Most of the time, testing is used to find changes that are associated with inherited disorders. The results of a genetic test can confirm or rule out a suspected genetic condition or help determine a person's chance of developing or passing on a genetic disorder. Several hundred genetic tests are currently in use, and more are being developed.

All content from Kiddle encyclopedia articles (including the article images and facts) can be freely used under Attribution-ShareAlike license, unless stated otherwise. Cite this article:
Genetic screening Facts for Kids. Kiddle Encyclopedia.