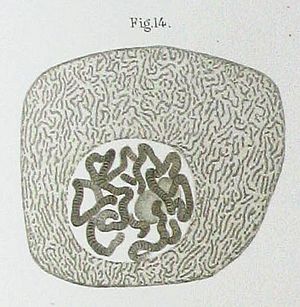 Drawing of a Chironomus (midge) salivary gland cell published by Walther Flemming in 1882. The nucleus contains polytene chromosomes like those of Drosophila.

Making use of dyes he was able to find a structure which he named chromatin. He identified that chromatin was correlated to threadlike structures in the cell nucleus– the chromosomes (meaning coloured body). Edouard Van Beneden (1846–1910) had also observed them, independently.

Flemming investigated the process of cell division and the distribution of chromosomes to the daughter nuclei, a process he called mitosis from the Greek word for thread. However, he did not see the splitting into identical halves, the daughter chromatids. He studied mitosis, both in life and in stained preparations, using as the source of biological material the fins and gills of salamanders. These results were published first in 1878 and in 1882 in the seminal book Zellsubstanz, Kern und Zelltheilung (1882; Cell substance, nucleus and cell division). On the basis of his discoveries, Flemming surmised for the first time that all cell nuclei came from another predecessor nucleus (he coined the phrase omnis nucleus e nucleo, after Virchow's omnis cellula e cellula).

Flemming was unaware of Gregor Mendel's (1822–1884) work on heredity, so he did not make the connection between his observations and genetic inheritance. Two decades would pass before the significance of Flemming's work was truly realized with the rediscovery of Mendel's rules. His discovery of mitosis and chromosomes is considered one of the 100 most important scientific discoveries of all times,

All content from Kiddle encyclopedia articles (including the article images and facts) can be freely used under Attribution-ShareAlike license, unless stated otherwise. Cite this article:
Walther Flemming Facts for Kids. Kiddle Encyclopedia.