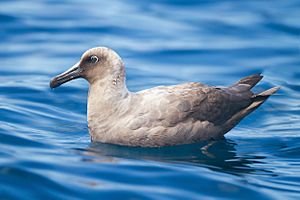 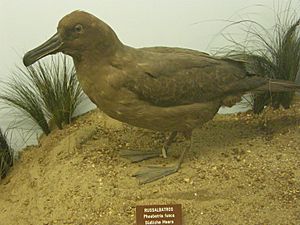 Sooty albatrosses are a type of albatross that belongs to family Diomedeidae of the order Procellariiformes, along with shearwaters, fulmars, storm petrels, and diving petrels. They share certain identifying features. First, they have nasal passages which attach to the upper bill called naricorns. Although the nostrils on the albatross are on the sides of the bill, the bills of Procellariiformes are also unique in that they are split into between 7 and 9 horny plates. Finally, they produce a stomach oil made up of wax esters and triglycerides which is stored in the proventriculus. This is used against predators as well as being an energy-rich food source for chicks and for the adults during their long flights. They also have a salt gland that is situated above the nasal passage and helps desalinate their bodies, which is necessitated by the high amount of sea water that they imbibe. It excretes a richly saline solution from the nose.

The sooty albatross is a medium-sized albatross, measuring about 85 cm (33 in), with a 2 m (6.6 ft) wingspan. Adult body mass ranges from 2.1 to 3.4 kg (4.6 to 7.5 lb). It is sooty-brown with darker shading on the sides of its head. It has a white crescent above and behind its eye. Its bill is black with an orange or yellow sulcus. The tail of this albatross is wide diamond-shaped. Juveniles are similar to adults, although they can have paler feathers on the nape and upper back, possibly creating confusion with light-mantled albatross.

Their diet consists of squid, crustaceans, cephalopods, fish, and carrion.

The sooty albatross is a colonial bird, although not to the same degree as other albatrosses, as their colonies usually consist of 50 to 60 pairs. They will build their nests on cliffs and steep slopes. Although are able to mate annually, they normally only do so biennially.

This albatross nests on islands in the southern Atlantic Ocean (Gough Island and the Tristan da Cunha group) and Indian Ocean (Prince Edward Island, Marion Island, the Crozet Islands, Amsterdam Island, and Kerguelen Islands). They forage in both oceans north to about 30°S.

Populations have shrunk 75% over the last 90 years, although the rate of reduction has recently slowed. The 21st century has so far seen stable populations at Gough Island.

This species is not excessively affected by longline fisheries, but instead by domestic cats eating eggs and chicks on Amsterdam Island and the Kerguelen Islands. Avian cholera, pasteurellosis, and erysipelas are major threats. Illegal poaching has nearly ceased.

Studies and surveys are conducted to assist in slowing its demise. It is a protected species on the Tristan da Cunha group, Gough Island is a World Heritage Site, and Prince Edward Island, Gough Island, and Inaccessible Island in the Tristan da Cunha group are protected nature preserves. Also, in 2007, the Crozet Islands, Amsterdam Island, and the Kerguelen Islands were declared nature preserves.

All content from Kiddle encyclopedia articles (including the article images and facts) can be freely used under Attribution-ShareAlike license, unless stated otherwise. Cite this article:
Sooty albatross Facts for Kids. Kiddle Encyclopedia.