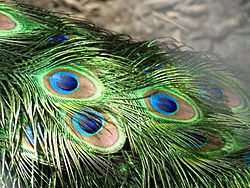 The brilliant iridescent colours of the male Peacock's tail feathers are created by structural coloration, as first noted by Isaac Newton and Robert Hooke.

English scientists Robert Hooke and Isaac Newton were the first who observed structural coloration. Thomas Young described its principle a century later and called it wave interference. Young described iridescence as the result of interference between reflections from several surfaces of thin films, combined with refraction as light enters and leaves such films. The geometry then determines that at certain angles, the light reflected from both surfaces adds (interferes constructively), while at other angles, the light subtracts. As a result, different colors appear at different angles.

All content from Kiddle encyclopedia articles (including the article images and facts) can be freely used under Attribution-ShareAlike license, unless stated otherwise. Cite this article:
Structural color Facts for Kids. Kiddle Encyclopedia.