Jordan Romero (born July 12, 1996) is an American mountain climber who was 13 years old when he reached the summit of Mount Everest. Romero was accompanied by his father, Paul Romero, his step-mother, Karen Lundgren, and three Sherpas, Ang Pasang Sherpa, Lama Dawa Sherpa, and Lama Karma Sherpa. The previous record for youngest to climb Everest was held by Ming Kipa of Nepal who was 15 years old when she reached the summit on May 22, 2003.

Upon successfully hiking the Vinson Massif in December 2011 at the age of 15 years, 5 months, 12 days, Romero became the youngest climber in the world to complete the Seven Summits, a title previously held by George Atkinson. After this experience, Romero wrote a novel for children called "No Summit Out Of Sight". 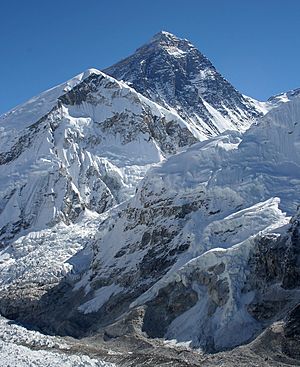 Everest as viewed from Nepal 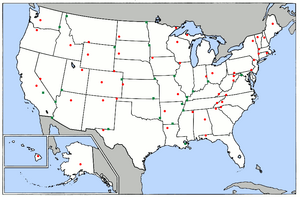 State high points are shown as red circles. Low points are shown with green squares, except in states whose lowest elevation spans coastlines or lake shores (the Great Lakes or Lake Champlain).(See also List of U.S. states by elevation)

Romero is now trying to climb the highest point in each of the 50 US states. He had already climbed Denali in June 2008. (see also Peak bagging (Climbing list))

Romero grew up in Big Bear Lake, California, and currently resides in Salt Lake City, Utah. He was born to Paul Romero and Leigh Anne Drake.

Prior to climbing Everest, Romero had already climbed five of the seven highest peaks in the world in his desire to scale the tallest peaks on the seven continents (counting two for Oceania). He finished the seven summits with Mount Vinson in Antarctica at age 15. Before climbing Everest, Romero's highest peak was Aconcagua, 6,962 m (22,841 ft) in elevation. His group chose a northern route out of Tibet and carried a GPS tracking device and satellite phone. Along the way to the top, Romero conducted an interview from an intermediate base camp 18,700 feet above sea level. Upon reaching Mount Everest's summit, a Skype interview was accomplished and Romero also called his mother, who had been following the climb on a map which included GPS coordinates, pictures and video.

After Romero climbed Mount Everest he and Katherine Blanc.. At the end of 2014 Romero with Linda LeBlanc wrote another book No Summit out of Sight: The True Story of the Youngest Person to Climb the Seven Summits.

All content from Kiddle encyclopedia articles (including the article images and facts) can be freely used under Attribution-ShareAlike license, unless stated otherwise. Cite this article:
Jordan Romero Facts for Kids. Kiddle Encyclopedia.