The Alpine chough (Pyrrhocorax graculus) is a type of bird in the crow family. It is one of only two species in the genus Pyrrhocorax. It nests in the mountains. It can be found in Spain and Morocco eastwards through southern Europe to the Himalayas.

This bird has glossy black plumage, a yellow bill, red legs, and a distinctive call. It has a buoyant acrobatic flight with widely spread primaries. The Alpine Chough pairs for life and displays fidelity to its breeding site, which is usually a cave or crevice in a cliff face. It builds a wool-lined stick nest and lays three eggs. It feeds, often in flocks, on short grazed grassland, taking mainly invertebrate prey.

Although it is subject to predation (its main predator is the golden eagle) and parasitism, the main threat to this species is changes in agricultural practices, which have led to population decline and range fragmentation in Europe; however, it is not threatened globally. 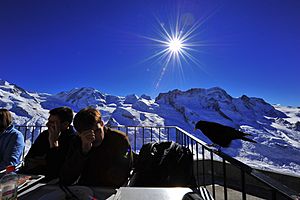 A chough probably looking for supplementary food is perching on a railing alongside visitors to Gornergrat, high in the Swiss Alps

The adult of the nominate subspecies of the Alpine Chough has glossy black plumage, a short yellow bill and red legs. It is slightly smaller than Red-billed Chough, at 37–39 cm (14.6–15.4 in) length with a 12–14 cm (4.7–5.5 in) tail and a 75–85 cm (29.5–33.5 in)wingspan, but has a relatively longer tail and shorter wings than its relative. It has a similar buoyant and easy flight. The sexes are identical although the male averages slightly larger than the female. The juvenile is duller than the adult with a horn-coloured bill and brownish legs. 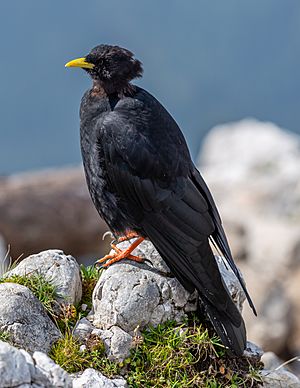 The Alpine Chough breeds in mountains from Spain east through southern Europe and the Alps across Central Asia and the Himalayas to western China, There are also populations in Morocco, Corsica and Crete. It is a non-migratory resident throughout its range, but birds have wandered to Czechoslovakia, Gibraltar, Hungary and Cyprus. 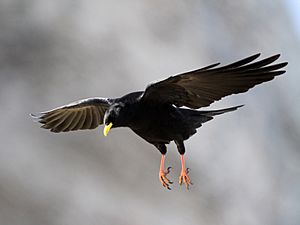 In the western Italian Alps, the Alpine Chough nested in a greater variety of sites than Red-billed Chough, using natural cliffs, the windows of a dam, pot-holes and abandoned buildings, whereas Red-billed used used only natural cliffs (although it nests in old buildings elsewhere).

The Alpine Chough lays about one month earlier than its relative, although breeding success and reproductive behaviour were similar. The similarities between the two species presumably arise because of the same strong environmental constraints on breeding behaviour. 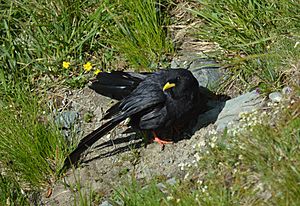 Where the two chough species occur together, there is only limited competition for food. An Italian study showed that the vegetable part of the winter diet for the Red-billed Chough was almost exclusively Gagea bulbs, whilst the Alpine Chough took berries and hips. 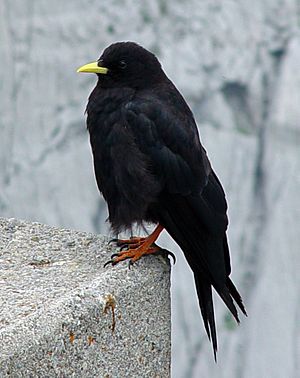 The Alpine Chough has an extensive range, estimated at 1–10 million square kilometres (0.4–3.8 million sq mi), and a large population, including an estimated 260,000 to 620,000 individuals in Europe. Over its range as a whole, the species is not believed to approach the thresholds for the global population decline criterion of the IUCN Red List (i.e., declining more than 30% in ten years or three generations), and is therefore evaluated as Least Concern.

At the greatest extent of the last glacial period around 18,000 years ago, southern Europe was characterized by cold open habitats, and the Alpine Chough was found as far as south as southern Italy, well outside its current range. Some of these prehistoric populations persisted into more recent times, only to have disappeared in the last couple of centuries.

In the Polish Tatra Mountains, where a population had survived since the glacial period, it was not found as a breeding bird after the 19th century. Given its adaptability, local declines are unlikely to be due to outright destruction of habitat, and perhaps better explained by habitat loss due to global warming, which would cause the species' preferred Alpine climate zone to shift or, dependent on the locality, disappear entirely.

All content from Kiddle encyclopedia articles (including the article images and facts) can be freely used under Attribution-ShareAlike license, unless stated otherwise. Cite this article:
Alpine chough Facts for Kids. Kiddle Encyclopedia.