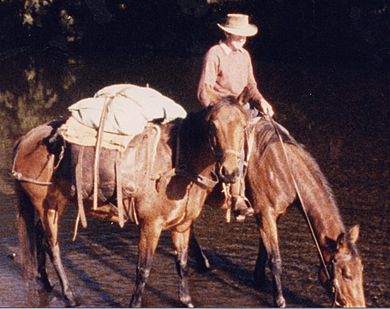 A pack animal, also known as a sumpter animal or beast of burden, is an individual or type of working animal used by humans as means of transporting materials by attaching them so their weight bears on the animal's back, in contrast to draft animals which pull loads but do not carry them.

The term pack animal is traditionally used in contrast to draft animal, which is a working animal that typically pulls a load behind itself (such as a plow, a cart, a sled or a heavy log) rather than carrying cargo directly on its back. For instance, sled dogs pull loads but do not normally carry them, while working elephants have been used for centuries to haul logs out of forests.

Traditional pack animals include ungulates such as camels, the domestic yak, reindeer, goats, water buffaloes and llama, and domesticated members of the horse family including horses, donkeys, and mules. Occasionally, dogs can be used to carry small loads. 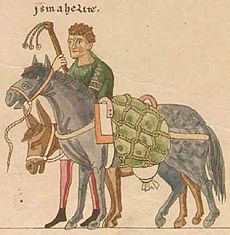 Medieval pack horse and donkey in Hortus Deliciarum, Europe, 12th century, when packing was a major means of transport of goods 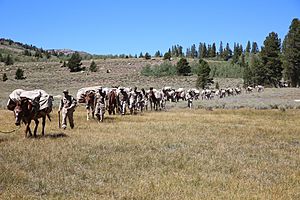 US Marines training in resupply with pack mules. Bridgeport, California, 2014

Hauling of goods in wagons with horses and oxen gradually displaced the use of packhorses, which had been important until the Middle Ages, by the sixteenth century.

Pack animals may be fitted with pack saddles and may also carry saddlebags.

While traditional usage of pack animals by nomadic tribespeople is declining, a new market is growing in the tourist expeditions industry in regions such as the High Atlas mountains of Morocco, allowing visitors the comfort of backpacking with animals. The use of pack animals "is considered a valid means of viewing and experiencing" some National Parks in America, subject to guidelines and closed areas.

In the 21st century, special forces have received guidance on the use of horses, mules, llamas, camels, dogs, and elephants as pack animals.

The maximum load for a camel is roughly 300 kg.

Reindeer can carry up to 40 kg for a prolonged period in mountains.

All content from Kiddle encyclopedia articles (including the article images and facts) can be freely used under Attribution-ShareAlike license, unless stated otherwise. Cite this article:
Pack animal Facts for Kids. Kiddle Encyclopedia.