The Naples National Archaeological Museum (Museo Archeologico Nazionale di Napoli, MANN) is a museum in Naples. The museum has a large display of Roman artifacts from Pompeii, Stabiae and Herculaneum. The display has works made in Greek, Roman and Renaissance times. It is known as the most important Italian archaeological museum. 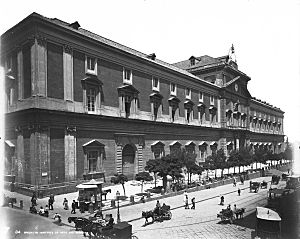 Charles III of Spain started the museum in the 1750s. The building was used to house soldiers in the 18th century.

All content from Kiddle encyclopedia articles (including the article images and facts) can be freely used under Attribution-ShareAlike license, unless stated otherwise. Cite this article:
Naples National Archaeological Museum Facts for Kids. Kiddle Encyclopedia.