The Alexander Mosaic is a Roman floor mosaic from the House of the Faun in Pompeii. It was made in 100 BC. It shows a battle between the armies of Alexander the Great and Darius III of Persia. It measures 2.72 x 5.13m (8 ft 11in x 16 ft 9in). The original is at the Naples National Archaeological Museum. The mosaic is based on a 3rd-century BC Hellenistic painting, by Philoxenos of Eretria. 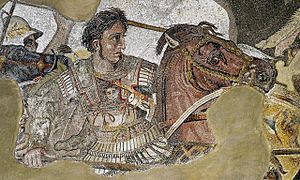 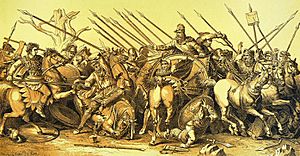 1893 Reconstruction of the mosaic depiction.

The two main figures are easy to see. Darius has a worried expression on his face. The Persian soldiers have a stern look.

The mosaic was found again on October 24, 1831 in Pompeii. It was moved to Naples in September 1843. It is in the Museo Archeologico Nazionale. 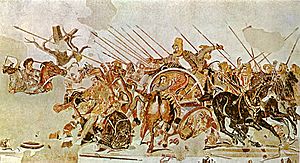 Modern reconstruction of the Alexander Mosaic.

All content from Kiddle encyclopedia articles (including the article images and facts) can be freely used under Attribution-ShareAlike license, unless stated otherwise. Cite this article:
Alexander Mosaic Facts for Kids. Kiddle Encyclopedia.