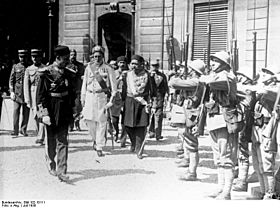 "Bey" (Ottoman Turkish: بك "Beik", Albanian: bej, Bosnian: beg, Arabic: بيه‎code: ar is deprecated "Beyeh", Persian: بیگ "Beyg" or بگ "Beg") is a traditionally Turkish title for Chieftain ruler of a Beylik, for the leaders or rulers of various sized areas in the Ottoman Empire. The equivalent title for women was Begum.

In modern times, the word is still used formally as a social title for men. It is cited after the name and is used generally with first names and not with last names.

The word entered English from Turkish bey, itself derived from Old Turkic beg, which - in the form bäg - has been mentioned as early as in the Orkhon inscriptions (8th century AD) and is usually translated as "tribal leader". The actual origin of the word is still disputed, though it is mostly agreed that it was a loan-word, in Old Turkic. This Turkic word is usually considered a borrowing from an Iranian language. However, German Turkologist Gerhard Doerfer assessed the derivation from Iranian as superficially attractive but quite uncertain, and pointed out the possibility that the word may be genuinely Turkic.

All content from Kiddle encyclopedia articles (including the article images and facts) can be freely used under Attribution-ShareAlike license, unless stated otherwise. Cite this article:
Bey Facts for Kids. Kiddle Encyclopedia.