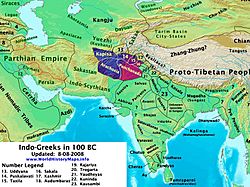 The Indo-Greek Kingdom was a part of the Greek Empire. It ruled in parts of northwest and northern Indian subcontinent (present-day Pakistan) from 180 BCE to around 10 CE, and was ruled by a succession of more than thirty Hellenic kings.

All content from Kiddle encyclopedia articles (including the article images and facts) can be freely used under Attribution-ShareAlike license, unless stated otherwise. Cite this article:
Indo-Greek Kingdom Facts for Kids. Kiddle Encyclopedia.