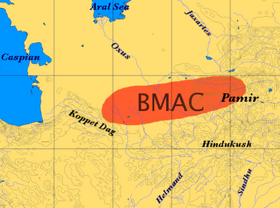 The extent of the BMAC (after EIEC).

The Bactria–Margiana Archaeological Complex (or BMAC, also known as the Oxus civilization) is the modern archaeological name for a Bronze Age culture of Central Asia, dated to ca. 2300–1700 BCE. It was in present-day Turkmenistan, northern Afghanistan and northeastern Iran, southern Uzbekistan and western Tajikistan. Its sites were discovered and named by the Soviet archaeologist Viktor Sarianidi (1976). Bactria was the Greek name for the area of Bactra (modern Balkh), in what is now northern Afghanistan. Margiana was the Greek name for the Persian satrapy of Margu, in today's Turkmenistan.

Sarianidi's excavations from the late 1970s onward many buildings in many sites. Reports on the BMAC were mostly in Soviet journals, until the last years of the Soviet Union. The findings were unknown to the West until Sarianidi's work was translated in the 1990s.

There is archaeological evidence of settlement in the well-watered northern foothills of the Kopet Dag during the Neolithic period. This region is dotted with the multi-period hallmarks characteristic of the ancient Near East, similar to those southwest of the Kopet Dag in the Gorgan Plain in Iran. At Jeitun (or Djeitun), mud brick houses were first occupied c. 6000 BC. The inhabitants were farmers who kept herds of goats and sheep and grew wheat and barley, with origins in southwest Asia. Jeitun has given its name to the whole Neolithic period in the northern foothills of the Kopet Dag. At the late Neolithic site of Chagylly Depe, farmers increasingly grew the kinds of crops that are typically associated with irrigation in an arid environment, such as hexaploid bread wheat, which became predominant during the Chalcolithic period. 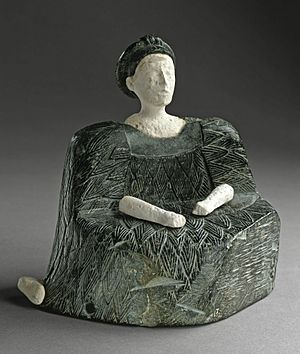 During the Copper Age, the population of this region grew. Archaeologist Vadim Mikhaĭlovich Masson, who led the South Turkmenistan Complex Archaeological Expedition from 1946, sees signs that people migrated to the region from central Iran at this time, bringing metallurgy and other innovations, but thinks that the newcomers soon blended with the Jeitun farmers. By contrast a re-excavation of Monjukli Depe in 2010 found a distinct break in settlement history between the late neolithic and early chalcolithic eras there. 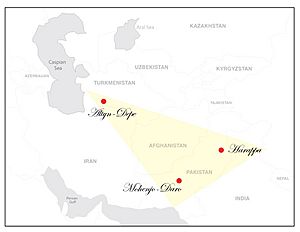 Altyn-Depe location on the modern Middle East map as well as location of other Eneolithic cultures (Harappa and Mohenjo-daro).

Major chalcolithic settlements sprang up at Kara-Depe and Namazga-Depe. In addition, there were smaller settlements at Anau, Dashlyji, and Yassy-depe. Settlements similar to the early level at Anau also appeared further east– in the ancient delta of the river Tedzen, the site of the Geoksiur Oasis. About 3500 BC, the cultural unity of the area split into two pottery styles: colourful in the west (Anau, Kara-Depe and Namazga-Depe) and more austere in the east at Altyn-Depe and the Geoksiur Oasis settlements. This may reflect the formation of two tribal groups. It seems that around 3000 BC, people from Geoksiur migrated into the Murghab delta (where small, scattered settlements appeared) and reached further east into the Zerafshan Valley in Transoxiana. In both areas pottery typical of Geoksiur was in use. In Transoxiana they settled at Sarazm near Pendjikent. To the south the foundation layers of Shahr-i Shōkhta on the bank of the Helmand river in south-eastern Iran contained pottery of the Altyn-Depe and Geoksiur type. Thus the farmers of Iran, Turkmenistan and Afghanistan were connected by a scattering of farming settlements.

In the Early Bronze Age the culture of the Kopet Dag oases and Altyn-Depe developed a proto-urban society. This corresponds to level IV at Namazga-Depe. Altyn-Depe was a major centre even then. Pottery was wheel-turned. Grapes were grown. The height of this urban development was reached in the Middle Bronze Age c. 2300 BC, corresponding to level V at Namazga-Depe. It is this Bronze Age culture which has been given the BMAC name. 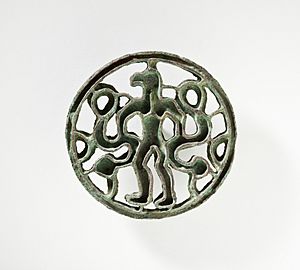 The inhabitants of the BMAC were sedentary people who practised irrigation farming of wheat and barley. With their impressive material culture including monumental architecture, bronze tools, ceramics, and jewellery of semiprecious stones, the complex exhibits many of the hallmarks of civilisation. The complex can be compared to proto-urban settlements in the Helmand basin at Mundigak in western Afghanistan and Shahr-e Sukhteh in eastern Iran, or at Harappa and Mohenjo-daro in the Indus Valley.

Sarianidi regards Gonur as the "capital" of the complex in Margiana throughout the Bronze Age. The palace of north Gonur measures 150 metres by 140 metres, the temple at Togolok 140 metres by 100 metres, the fort at Kelleli 3 125 metres by 125 metres, and the house of a local ruler at Adji Kui 25 metres by 25 metres. Each of these formidable structures has been extensively excavated. While they all have impressive fortification walls, gates, and buttresses, it is not always clear why one structure is identified as a temple and another as a palace. Mallory points out that the BMAC fortified settlements such as Gonur and Togolok resemble the qila, the type of fort known in this region in the historical period. They may be circular or rectangular and have up to three encircling walls. Within the forts are residential quarters, workshops and temples.

The people of the BMAC culture were very proficient at working in a variety of metals including bronze, copper, silver, and gold. This is attested through the many metal artefacts found throughout the sites.

Extensive irrigation systems have been discovered at the Geoksiur Oasis.

Models of two-wheeled carts from c. 3000 BC found at Altyn-Depe are the earliest complete evidence of wheeled transport in Central Asia, though model wheels have come from contexts possibly somewhat earlier. Judging by the type of harness, carts were initially pulled by oxen, or a bull. However camels were domesticated within the BMAC. A model of a cart drawn by a camel of c. 2200 BC was found at Altyn-Depe.

The discovery of a single tiny stone seal (known as the "Anau seal") with geometric markings from the BMAC site at Anau in Turkmenistan in 2000 led some to claim that the Bactria-Margiana complex had also developed writing, and thus may indeed be considered a literate civilisation. It bears five markings strikingly similar to Chinese "small seal" characters, but such characters date from the Qin reforms of roughly 220 BC, while the Anau seal is dated by context to 2300 BC. It is therefore an unexplained anomaly. The only match to the Anau seal is a small jet seal of almost identical shape from Niyä (near modern Minfeng) along the southern Silk Road in Xinjiang, assumed to be from the Western Han dynasty.

All content from Kiddle encyclopedia articles (including the article images and facts) can be freely used under Attribution-ShareAlike license, unless stated otherwise. Cite this article:
Bactria–Margiana Archaeological Complex Facts for Kids. Kiddle Encyclopedia.