Herat (Persian/Pashto: هرات) is one the 34 provinces of Afghanistan. It is in the south-western region of the country. The main city and capital is named Herat.

The region of Herat used to be part of Greater Khorasan. It was ruled by the Tahirids followed by the Saffarids, Samanids, Ghaznavids, Ghurids, Ilkhanates, Timurids, and Saffavids. In the early-18th century it became part of the Afghan Hotaki dynasty followed by the Durrani Empire.

There are 16 districts within the province. These are listed in the table below. 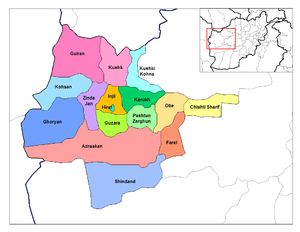 Football (soccer) is the popular sport in Herat Province. Cricket is also getting popular.

All content from Kiddle encyclopedia articles (including the article images and facts) can be freely used under Attribution-ShareAlike license, unless stated otherwise. Cite this article:
Herat Province Facts for Kids. Kiddle Encyclopedia.