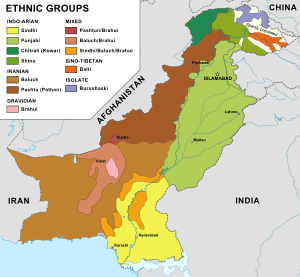 The main ethnic groups of Pakistan.

The Brahui people (Brahui: بروہی) are the only Dravidian ethnic group in Pakistan. Of the 2.2 million Brahuis, most live in Baluchistan and Afghanistan, where they are native. They are closely linked to the Balochs with whom they have intermingled, and whose cultural traits they have absorbed. Linguistically they were believed to be a remnant of the inhabitants of the IVC. The Brahui language, also called Bravi, is a Dravidian language.

DNA studies suggest that the Brahui are most closely related to the ancient Dravidian people, which are descedants of neolithic farmers from the Zagros mountains area in modern day Iran.

All content from Kiddle encyclopedia articles (including the article images and facts) can be freely used under Attribution-ShareAlike license, unless stated otherwise. Cite this article:
Brahui people Facts for Kids. Kiddle Encyclopedia.