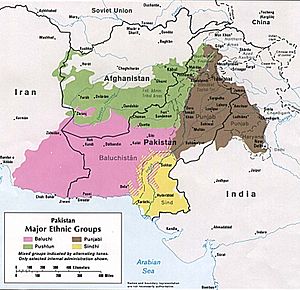 Major ethnic groups in Pakistan and surrounding areas, in 1980. The Baloch are shown in pink.

Balochistan or Baluchistan is an arid region on the Iranian plateau. The plateau is in Southwest Asia and South-central Asia, between Pakistan, Iran and Afghanistan. The area is named after the numerous Baloch tribes. The Baloch are of Aryan and other races who moved into the area from the west around A.D. 1000. All natives are considered Baloch even if they do not speak the Balochi language; Pashto, Persian, Hazaragi language, and Brahui languages are also spoken in the region. The southern part of Balochistan is known as Makran. Now it is recognised by UNPO as an Unrepresented Nation.

Baluchistan's landscape is made of barren, rugged mountains and fertile land. During the summer, some regions of Baluchistan are the hottest. Most of the land is barren, particularly the Iranian and Afghan side of the region. Relatively few people live there. In the south (Makran) is the desert through which Alexander the Great passed with great difficulty.

All content from Kiddle encyclopedia articles (including the article images and facts) can be freely used under Attribution-ShareAlike license, unless stated otherwise. Cite this article:
Balochistan (region) Facts for Kids. Kiddle Encyclopedia.