Makran (Urdu: مکران) is a partly-desert coastal strip in the south of Balochistan, in Iran and Pakistan. It is along the coast of the Arabian Sea and the Gulf of Oman. The Persian phrase Mahi khoran, fish-eaters (Mahi = fish + khor = eat) is believed to be the origin of the modern word Makran. 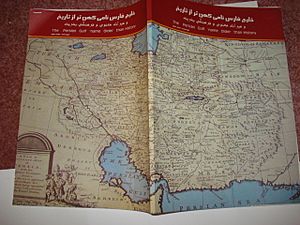 The narrow coastal plain rises very rapidly into several mountain ranges. The coastline is 1,000 km, 750 km of this is in Pakistan. The climate is very dry with very little rainfall.

All content from Kiddle encyclopedia articles (including the article images and facts) can be freely used under Attribution-ShareAlike license, unless stated otherwise. Cite this article:
Makran Facts for Kids. Kiddle Encyclopedia.