Cramlington is a town and civil parish in Northumberland, England, 6 miles (9 kilometres) north of Newcastle upon Tyne, and 10 miles (16 kilometres) north of its city centre. The name suggests a probable founding by the Danes or Anglo-Saxons. The population was 29,405 as of 2011 census data from Northumberland County Council. It sits on the border between Northumberland and North Tyneside with the traffic interchange at Moor Farm, Annitsford, linking the two areas.

The area of East Cramlington lies east of the A189, on the B1326 road that connects the town to Seaton Delaval.

The first record of the Manor of Cramlington is from a mention in 1135 when the land was granted to Nicholas de Grenville. A register of early chaplains begins with John the Clerk of Cramlington (c. 1163–1180). The register continues to the present day.

From the 12th century onwards, its history has been mostly rural, incorporating several farms and the parish church of St. Nicholas (built at a cost of £3,000 during 1865–1868 in the Gothic style). During the early 19th century, coal mining with several mine shafts in the immediate vicinity began to change that. In 1813 Collingwood Main Colliery suffered an explosion of firedamp in which 8 people were killed. Six miners were carrying timber through the "old workings" when their candles set fire to firedamp. The resulting afterdamp and chokedamp resulted in a wider loss of life to men and horses. It remained small, however, until 1964 when it was proclaimed a New Town and developers such as William Leech and J.T. Bell developed large housing estates. Those estates have since been named Beaconhill, Collingwood, Eastfield, Mayfield, Shankhouse, Southfield, and Whitelea and the town has effectively become a dormitory town of the much larger city to its south.

During World War I, the North East of England was protected by the No. 36 Home Defence Squadron. The squadron was formed at Cramlington on 1 February 1916 by Capt. R. O. Abercromby, with Cramlington subsequently becoming an important base for military planes and airships. The Airship Station was at Nelson Village. A reference to Cramlington airfield is made in W. E. Johns 1935 book The Black Peril from the extremely popular Biggles series.

Cramlington was the site of two rail accidents. In 1855, the chassis of train's first class carriage failed and in 1926, the Merry Hampton engine and five carriages of the Edinburgh to King's Cross Flying Scotsman express train were derailed by striking miners during the General Strike. The story of the derailment was recounted in the BBC Two programme Yesterday's Witness: The Cramlington Train Wreckers in 1970.

During the BBC Domesday Project in 1986 it was recorded that Cramlington's population was around 30,000.

The idea of a new town development in Cramlington was first envisaged in 1958.

In June 1961, Northumberland County Council's Planning Committee approved the draft plans to establish what it hoped would be "Britain's first enterprise town." Sponsored by the council, the development was to be carried by a consortium led by William Leech, which had acquired the land. It was predicted to take 20 years, cost £50m and eventually house 40,000 inhabitants across a four square mile site that also included an industrial zone. A one-way road system was proposed, with the waggon ways of the former pits being repurposed as pedestrians paths.

The plan was finally approved by the Minister of Housing and Local Government in January 1963, by which time the estimated population had grown to 48,000 and the cost projected at £60m. It marked the first time a new town had been developed without the establishment of a government-backed development corporation. The planning officer predicted that it should look like a town in five years and be complete in 20 years. The first factory was to be completed by summer 1963.

In October 1964, an advert inviting investment in the development recorded an area of 2,200 acres, 530 of which were for industry.

With the establishment of the new town, the area was arranged into estates, primarily with a designator of the part of the town in which the estate was to be found.

Plessey Woods Country Park lies just to the north of Cramlington, with the River Blyth flowing through the country park. Northumberlandia, a huge land sculpture in the shape of a reclining female figure is located on the outskirts of Cramlington. Within the town itself, Nelson Hill is a prominent landmark to the north of the town centre. Arcot Hall Grasslands and Ponds SSSI is situated to the south-east of the town. 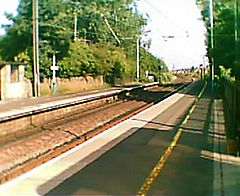 The town is served by Cramlington Railway Station which is on the East Coast Main Line, with services to the MetroCentre, Morpeth and Newcastle upon Tyne provided by Northern.

Cramlington also has good road transport links, being situated between the A1, A19 and A189 roads.

In line with many of the UK's post-war New Towns, Cramlington has an extensive bicycle network. With a grid spacing of approximately 500 m (1,600 ft), segregated cycle routes are provided free of motorised traffic.

Cramlington has a number of Christian churches of various denominations:

Cramlington's main leisure centre, Concordia, is situated in the town centre adjacent to the shopping mall and was opened by Queen Elizabeth II in July 1977. It features a leisure pool, originally designed as an indoor tropical paradise, indoor football pitches, tennis, badminton and squash courts, as well as a climbing wall. It also includes a gymnasium, sauna, bowling green, bar and cafeteria. It was refurbished in 2008, particularly to improve disabled access. The pool was also refurbished in 2011. A major refurbishment began in 2016, with the addition of new facilities and the improvement of existing ones.

A large cycle path network, completely separate from the road network, was a key part of the new town design. A cycle route also connects the town to the nearest beach, in Blyth. In March 2007, Blyth Valley Borough Council announced that the cycle network was to be extended to allow access to the neighbouring town of Bedlington.

The village square is home to four public houses, including the Grade II listed Blagdon Arms.

Arcot Hall Golf Club is located to the south of the town.

As part of the former Blyth Valley borough, Cramlington participates in a town twinning scheme with three other towns — two in Germany and one in the Russian Federation.

There are several large industrial zones in Cramlington, most to the town's north-west near the sewage treatment plant, housing major pharmaceutical companies including Merck Sharp and Dohme. Other growing chemical companies including Aesica Pharmaceuticals are also present. The Officers Club menswear firm (now owned by Blue Inc), previously had its headquarters and supply warehouse in Cramlington, in part of the old Wilkinson Blade factory while other companies such as GE Oil & Gas also occupy large sites. Start Football is also headquartered in the town.

Boots, the pharmaceuticals manufacturer, opened their plant in Cramlington in 1983.

The Manor Walks shopping centre was constructed in the centre of the town in the 1970s, and was subsequently expanded in the mid-1990s and in 2003/4. The centre now includes retailers such as Argos, Asda, Boots, Next and Sainsbury's. In 2011, plans were put forward to revamp the main center and build a new cinema. The scheme also includes improved retail facilities, restaurants and cafes and more car parking spaces.

Manor Walks was extended into the southern car park in 2012 / 2013 and a new Vue Cinema and two new restaurants opened in July 2013. This coincided with the re-opening of a prominent pub in the town (previously the Traveller's Rest but now named John the Clerk of Cramlington). It is hoped that these developments will boost the town's leisure and visitor economies.

The Brockwell Centre, built in 1990 towards the north of the town, consists of a small range of shops and food outlets, alongside a public house, care home and medical centre. A supermarket, built for Netto, but subsequently owned by Somerfield and The Co-operative Group, is presently occupied by Home Bargains.

Northumbria Healthcare NHS Foundation Trust opened the first hospital in England purpose-built for emergency care in the town in June 2015. The Northumbria Specialist Emergency Care Hospital cost £75 million. It has emergency care consultants on duty at all times, and a range of specialists available seven days a week.

Until September 2008, all schools in Northumberland operated under a three tier system, however, following a decision to convert the county to a two tier system, Cramlington was chosen as one of the first towns to complete this. Prior to the closure of the area's many middle schools, some primary schools relocated to the former middle school sites. There had been concern from local residents over traffic and parking arrangements at the new sites.

All content from Kiddle encyclopedia articles (including the article images and facts) can be freely used under Attribution-ShareAlike license, unless stated otherwise. Cite this article:
Cramlington Facts for Kids. Kiddle Encyclopedia.