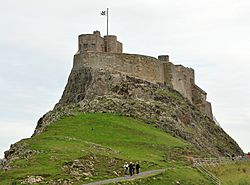 Lindisfarne Castle is a castle on Holy Island, near Berwick-upon-Tweed, Northumberland, England. The island is accessible from the mainland at low tide by means of a causeway. A fort was built here in 1550 during the time of Henry VIII. About 20 years later it was replaced by a stone fortress. It was abandoned in 1893 and afterwards used as a lookout by the Coastguard. In 1903, repair work started to change the fortress into a home by the new owner, Edward Hudson. In 1944, it was donated to the National Trust.

All content from Kiddle encyclopedia articles (including the article images and facts) can be freely used under Attribution-ShareAlike license, unless stated otherwise. Cite this article:
Lindisfarne Castle Facts for Kids. Kiddle Encyclopedia.