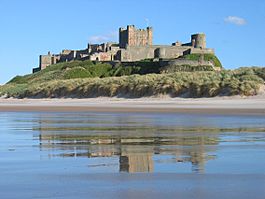 Bamburgh Castle is a castle on the coast at Bamburgh, Northumberland. It is a Grade I listed building. During WW2 the Royal Navy ship HMS Bamborough Castle was named after it.

The castle is built on the remains of a fort of native Britons. The fort was destroyed by the Vikings in 993.

The Normans then built a new castle on the site. That forms the centre of today's castle. The castle became the property of the reigning English Monarch. Many think that Henry II ordered the creation of the keep.

During the Wars of the Roses, it became the first castle in England to be defeated by artillery, after a nine-month siege. The Forester family of Northumberland provided the Crown with governors of the castle for 400 years, before the Crown granted ownership to Sir John Forester. When the family became bankrupt, the castle was sold to a series of owners. Eventually it was bought by the Armstrong family, who still own it today. They opened it to the public.

The castle has been used in movies including Macbeth (1971) and Robin of Sherwood (1984-6). It has also been featured in many books. The late medieval British author Thomas Malory suggested that it was Joyous Gard, the mythical home of Sir Lancelot from tales of King Arthur.

All content from Kiddle encyclopedia articles (including the article images and facts) can be freely used under Attribution-ShareAlike license, unless stated otherwise. Cite this article:
Bamburgh Castle Facts for Kids. Kiddle Encyclopedia.