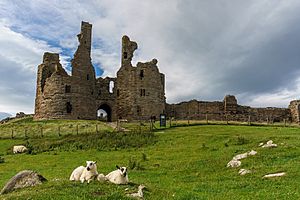 Dunstanburgh Castle is a castle built in the 14th century. It is on the coast of Northumberland between the villages of Craster and Embleton. It is on a huge rock next to the North Sea. The castle is owned by English Heritage. The name Dunstanburgh means 'the fort' (burgh) 'of the town' (dun) 'by the rock' (stan).

The castle was first built in 1313 by Thomas, 2nd Earl of Lancaster. However Roman and Iron Age remains have been found there. It may have been an Iron Age fort. He was an enemy of King Edward II. Thomas only visited the castle once before he was killed. The castle was not used again until the War of the Roses. The Earl of Warwick attacked it twice and it was almost destroyed.

The castle was defended in WW2 because it was a possible target for a German landing. Land mines were laid and a radar station was built near the castle. The beaches were guarded with barbed wire and concrete pillboxes were built nearby. The fort and other facilities were manned by soldiers.

It was not used again and is now in ruins. The area is now a Site of Special Scientific Interest.

All content from Kiddle encyclopedia articles (including the article images and facts) can be freely used under Attribution-ShareAlike license, unless stated otherwise. Cite this article:
Dunstanburgh Castle Facts for Kids. Kiddle Encyclopedia.