Rothbury emerged as an important town because of its location at a crossroads over a ford on the River Coquet. Turnpike roads leading to Newcastle-upon-Tyne, Alnwick, Hexham and Morpeth allowed for an influx of families and the enlargement of the settlement during the Middle Ages. In 1291, Rothbury was chartered as a market town and became a centre for dealing in cattle and wool for the surrounding villages during the Early Modern Era. Later, Rothbury developed extensively in the Victorian era, due in large part to the railway and the industrialist Sir William Armstrong. Between 1862 and 1865, Armstrong built Cragside, a country house and "shooting box" (hunting lodge) just outside Rothbury, and extended it as a "fairy palace" between 1869 and 1900. The house and its estate are now owned by the National Trust and are open to the public, attracting many visitors to the area.

Today, Rothbury is widely used for retirement and tourism; it is a staging point for recreational walking in the nearby Simonside Hills as well as the rest of the Northumberland National Park. Other attractions for tourists include the town's independent (non chain) shops.

The first mention of Rothbury, according to a local history, was in around the year 1100, as Routhebiria, or "Routha's town" ("Hrotha", according to Beckensall). Fragments from an Anglo-Saxon cross, believed to be 8th century, are the only surviving relics pre-dating the Norman conquest. They are now in the town church and the University of Newcastle Museum.

The village was retained as a Crown possession after the conquest, being made over to the Lords of Warkworth in 1204. Rothbury was a relatively important village in Coquetdale, being a crossroads situated on a ford of the River Coquet, with turnpike roads leading to Newcastle upon Tyne, Alnwick, Hexham and Morpeth. It was chartered as a market town in 1291, and became a centre for dealing in cattle and wool for the surrounding villages. A market cross was erected in 1722, but demolished in 1827. In the 1760s, according to Bishop Pococke, the village also had a small craft industry, including hatters. At that time, the village's vicarage and living was in the gift of the Bishop of Carlisle, and worth £500 per year.

Rothbury has had a turbulent and bloody history. In the 15th and 16th centuries the Coquet Valley was a pillaging ground for bands of Reivers who attacked and burned the town with terrifying frequency. Near the town's All Saints' Parish Church stands the doorway and site of the 17th century Three Half Moons Inn, where the Earl of Derwentwater stayed with his followers in 1715 prior to marching into a heavy defeat at the Battle of Preston.

Hill farming has been a mainstay of the local economy for many generations. Names such as Armstrong, Charleton and Robson remain well represented in the farming community. Their forebears, members of the reiver 'clans', were in constant conflict with their Scots counterpart. The many fortified farms, known as bastle houses, are reminders of troubled times which lasted until the unification of the kingdoms of England and Scotland in 1603.

The industrialist Lord Armstrong (1810–1900) helped shape modern Rothbury. Many local buildings reflect his Victorian style and prosperity. At the same time the planting of more than six million trees and shrubs transformed the surrounding landscape. His magnificent home at Cragside, now in the care of the National Trust, is visited by more than 150,000 people annually. 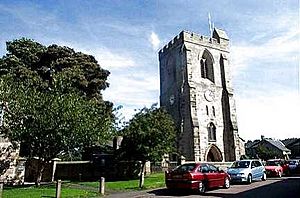 All Saints' Church incorporates materials from an ancient Anglo-Saxon place of worship.

Rothbury's Anglican parish church building – All Saints' Church – dates from circa 1850, largely replacing but in parts incorporating the fabric of a former Saxon edifice, including the chancel, the east wall of the south transept and the chancel arch. The church has a font with a stem or pedestal using a section of the Anglo-Saxon cross shaft, showing what is reputed to be the earliest carved representation in Great Britain of the Ascension of Christ.

The Anglo-Saxon cross is not to be confused with the market cross near the church, the current version of which was erected in 1902 and is known as "St Armstrong's Cross" as it was paid for by Lady Armstrong, widow of Lord Armstrong of Cragside. Until 1965, Rothbury was the location of a racecourse, which staged only one meeting per year, in April.

Half a mile to the south, Whitton Tower is an exceptionally well-preserved 14th century pele tower.

Lordenshaw Hill has the largest concentration of rock carvings in Northumberland. Over 100 panels have been recorded on the hill, the adjacent Whitton Burn and Garleigh Moor, in an area which covers less than 620 acres. The carved panels range from single cup-marked boulders to complex panels. There are many other interesting archaeological sites in this area, including a ditched Iron Age enclosure and an Early Bronze Age cairn. 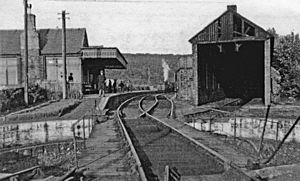 The town was the terminus of a branch line from Scotsgap railway station on the North British Railway line from Morpeth to Reedsmouth. The line opened on 1 November 1870, the last passenger trains ran on 15 September 1952 and the line closed completely on 9 November 1963. Rothbury station was located to the south of the River Coquet, and the site has been reused as an industrial estate, where the only obvious remains are one wall of the engine shed, which has become part of an engineering workshop. The old Station Hotel still stands near the site, but is now known as The Coquetvale Hotel. It was built in the 1870s by William Armstrong, as a suitable place for visitors to his house at Cragside to be accommodated.

The town is now served by an Arriva North East bus service which runs via Longframlington, Longhorsley, Morpeth and continues to Newcastle upon Tyne, the nearest city. PCL Travel, a local bus company, operates infrequent services to Alnwick. It also runs services roughly three times a day to Morpeth via Longframlington and Longhorsley.

Note: An ethnic group that is not on the table means that no one from

that ethnic group was recorded being present in Rothbury at the

time of the census.

Note: A religion that is not on the table means

that no practitioner of that religion was recorded

being present in Rothbury at the time of the census.

Rothbury is in the catchment area for The King Edward VI School, Morpeth, also run by The Three Rivers Learning Trust.

All content from Kiddle encyclopedia articles (including the article images and facts) can be freely used under Attribution-ShareAlike license, unless stated otherwise. Cite this article:
Rothbury Facts for Kids. Kiddle Encyclopedia.