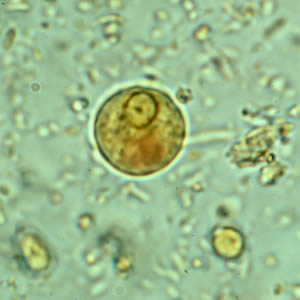 E. histolytica/E. dispar cyst in a wet mount stained with iodine. This early cyst has only one nucleus and a glycogen mass can be seen (brown stain)

In some cases, the parasite lives in a person's large intestine and does not cause any symptoms. Symptoms vary from serious to none at all. There may be abdominal pain, mild diarrhoea, bloody diarrhoea or severe colitis with tissue death and perforation. This last complication may cause peritonitis. People affected may develop anaemia due to loss of blood. 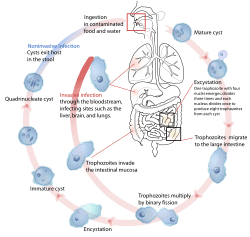 Life-cycle of the Entamoeba histolytica

Amoebiasis is usually transmitted by water contaminated with faeces. It can also be got indirectly by contact with dirty hands or objects.

Infection is spread by ingesting the cyst form of the parasite. This tough and semi-dormant structure is found in faeces. Since amoebiasis is transmitted by contaminated food and water, it is often endemic in parts of the world with poor sanitation (such as México, Central America, western South America, South Asia, and western and southern Africa).

E. histolytica infections occur in both the intestine and (in people with symptoms) in tissue of the intestine and/or liver. So, two different classes of drugs are needed to treat the infection, one for each location. Such anti-amoebic drugs are known as amoebicides.

All content from Kiddle encyclopedia articles (including the article images and facts) can be freely used under Attribution-ShareAlike license, unless stated otherwise. Cite this article:
Amoebiasis Facts for Kids. Kiddle Encyclopedia.