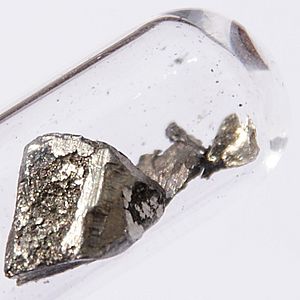 A period 6 element is an element in the sixth period (row) of the periodic table. It contains 32 elements, beginning at Caesium and ending with Radon. The Lanthanides are part of this period.

This period contains the lanthanides, also known as the rare earths. Many lanthanides are known for their magnetic properties, such as neodymium. Many period 6 transition metals are very valuable, such as gold, however many period 6 other metals are incredibly toxic, such as thallium. Period 6 contains the last stable element, lead. All subsequent elements in the periodic table are radioactive. After bismuth, which has a half-life or more than 1019 years, polonium, astatine, and radon are some of the shortest-lived and rarest elements known; less than a gram of astatine is estimated to exist on earth at any given time.

All content from Kiddle encyclopedia articles (including the article images and facts) can be freely used under Attribution-ShareAlike license, unless stated otherwise. Cite this article:
Period 6 element Facts for Kids. Kiddle Encyclopedia.