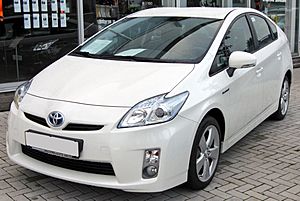 The Toyota Prius is a hybrid automobile from the Japanese automobile producer Toyota. It is called 'hybrid' because it has two different engines: a gasoline engine (combustion engine) and an electric motor. Because of the electric motor, it uses less fuel than a normal gasoline automobile when driving at low speeds (for example in the city). The electric motor uses batteries for its power, and these batteries are charged by a dynamo when the gasoline engine is used at higher speeds. The first generation launched in Japan in December 1997, then it reached the rest of the world in 2000. It entered its second generation in 2003 and it began to become more popular with buyers. The third generation arrived in 2009 and grew larger in size. The current fourth generation appeared in December 2015.

All content from Kiddle encyclopedia articles (including the article images and facts) can be freely used under Attribution-ShareAlike license, unless stated otherwise. Cite this article:
Toyota Prius Facts for Kids. Kiddle Encyclopedia.