They are native to Africa. The black mamba is one of the well-known species and is also the most feared. Most members of these snakes climb or live up trees and are active during the day. They generally avoid contact with humans.

The three species of green mambas are arboreal, whereas the black mamba is largely terrestrial. All four species are active diurnal hunters, preying on birds, lizards, and small mammals. At nightfall some species, especially the terrestrial black mamba, shelter in a lair. A mamba may retain the same lair for years.

Mambas and cobras are in the same family: the Elapidae. Like cobras, a mamba may rear and form a hood as part of its threat display, but the mamba's hood is narrower and is longer than the broader hood of some species of cobra, such as say, the spectacled cobras of parts of Asia. In their threat display mambas commonly gape; the black mamba's mouth is black within, which renders the threat more conspicuous. Typically also, a rearing mamba tends to lean well forward, instead of standing erect as a cobra does.

Stories of black mambas that chase and attack humans are common, but in fact the snakes generally avoid contact with humans. Most apparent cases of pursuit probably are examples of where witnesses have mistaken the snake's attempt to retreat to its lair when a human happens to be in the way. The black mamba usually uses its speed to escape from threats, and humans actually are their main predators, rather than prey. 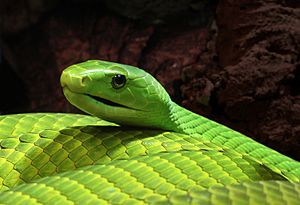 All mambas are highly venomous. Their venoms consist mostly of neurotoxins (known as dendrotoxins). Besides the neurotoxins, they also carry cardiotoxins and fasciculins. Other components may include calcicludine, which is a known component of the eastern green mamba's venom and calciseptine, which is a component of black mamba venom. Toxicity of individual specimens within the same species and subspecies can vary greatly based on several factors, including geographical region. Even the weather and altitude can influence toxicity (Ernst and Zug et al. 1996). A bite can be fatal to humans without access to proper first aid and subsequent antivenom treatment, as it shuts down the lungs and heart. The western green mamba (D. viridis), eastern green mamba (D. angusticeps), and Jameson's mamba (D. jamesoni) possess venom similar in composition and effects to that of the black mamba's (D. polylepis). However, as their venoms are less toxic (based upon LD50 studies), and their temperaments generally not as aggressive or as explosive when provoked, and as none of the three injects as much venom as the black mamba, their bites are materially less dangerous.

Before antivenom was available, envenomations by mambas carried a high fatality rate. Untreated black mamba bites have a mortality rate of 100%, but presently, fatalities have become much rarer due to wide availability of antivenom.

Mamba toxin (or dendrotoxin) consists of several components, with different targets. Examples are:

Dendroaspis, derives from Ancient Greek dendro (δένδρο), meaning "tree", and aspis (ασπίς), which is understood to mean "shield", but also denotes "cobra" or simply "snake", in particular "snake with hood (shield)". Via Latin aspis, it is the source of the English word "asp". In ancient texts, aspis or asp often referred to the Egyptian cobra (Naja haje), in reference to its shield-like hood. Thus, "Dendroaspis" literally means tree asp, reflecting the arboreal nature of most of the species within the genus. The genus was first described by the German ornithologist and herpetologist Hermann Schlegel in 1848. Evidence suggests that Dendroaspis, Ophiophagus, Bungarus, and Hemibungarus form a solid non-coral snake Afro-Asiatic clade.

Of the currently recognised mamba species, three are green and the other is the "black mamba", so called in spite of its generally brown or grey body.

All content from Kiddle encyclopedia articles (including the article images and facts) can be freely used under Attribution-ShareAlike license, unless stated otherwise. Cite this article:
Mamba Facts for Kids. Kiddle Encyclopedia.