Flag of Zimbabwe facts for kids 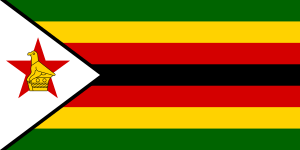 The flag of Zimbabwe has seven horizontal stripes of green, gold, red and black with a white triangle containing a red five-pointed star with a Zimbabwe Bird. The most recent design was adopted on April 18th, 1980. Zimbabwe won its freedom from the United Kingdom on this day. This design is adapted from the flag of the Zimbabwe African National Union, the current ruling party in Zimbabwe.

All content from Kiddle encyclopedia articles (including the article images and facts) can be freely used under Attribution-ShareAlike license, unless stated otherwise. Cite this article:
Flag of Zimbabwe Facts for Kids. Kiddle Encyclopedia.