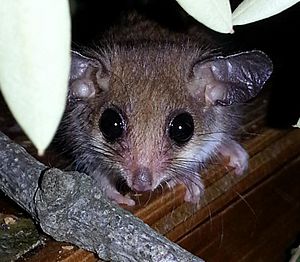 The western pygmy possum nests in the surrounding mallee woodland.

Eyre Bird Observatory is an educational, scientific and recreational facility in the Nuytsland Nature Reserve, Western Australia. Cocklebiddy is the nearest locality on the Eyre Highway, 49 km (30 mi) to the north. Sandwiched between the Nullarbor Plain to the north and the Great Australian Bight to the south, it lies in one of the least populated places on the Australian continent. It was established in 1977 by Birds Australia in the disused Eyre Telegraph Station as Australia's first bird observatory, to provide a base for the study and enjoyment of the birds of the area.

During their nearly 2,000-mile (3,200 km) 1841 journey overland from Adelaide to Albany, 26-year-old Edward John Eyre and his party - companion John Baxter and three Aboriginal men - found fresh water 2 metres (6.6 ft) beneath a coastal sand dune, and camped there for a month, recovering from severe dehydration and exhaustion. This location became known as Eyre's Sand Patch.

When the Inter-Colonial Telegraph Line reached the Patch in 1877, a weatherboard and corrugated iron building was erected to house a permanently manned repeater station, and the location was subsequently known as the Eyre Telegraph Station.

Twenty years later, in 1897, the station moved into a new limestone and corrugated iron building nearby until, in 1927 when the telegraph line moved 150 kilometres (93 mi) north to follow the Trans-Australian Railway, the building was abandoned.

Fifty years later, in 1977, the limestone building was restored by volunteers with the support of the Post Office Historical Society and Birds Australia, using materials supplied by the WA Department of Fisheries and Wildlife, and it now functions as a permanent bird observatory. The building is maintained by volunteers, including two caretakers who live on site for three months at a time.

Honeyeaters who spend the summer in the deep south-west extend their range north and east in the winter to feast on the flowering mallee and, at Eyre, honeyeaters, silvereyes and other species are found wintering in the narrow coastal mallee strip. A breeding colony of little penguins spends the summer west of Eyre at Twilight Cove. By 2008, 245 bird species had been recorded in the surrounding nature reserve.

All content from Kiddle encyclopedia articles (including the article images and facts) can be freely used under Attribution-ShareAlike license, unless stated otherwise. Cite this article:
Eyre Bird Observatory Facts for Kids. Kiddle Encyclopedia.