Dogwood is an unincorporated community in northwestern Douglas County, Missouri, United States. It is located on Missouri Route 14 about 15.5 miles (24.9 km) northwest of Ava and 8.5 miles (13.7 km) southwest of Seymour. The old store building sits at the intersection of Route 14 with route BB and the Dogwood cemetery is 1,300 feet (400 m) to the west at the intersection of route 14 and route Z.

In 1879 a Civil war veteran built a log store building and home near a spring surrounded by dogwoods along the route of the Springfield–Rockbridge portion of the old Salt Road along which salt, lumber and other materials had long been transported between northern Arkansas and Springfield. A post office was established at Dogwood in 1880 and remained in service until 1909. A school was established in 1888 and a log schoolbuilding was built north of the store in 1891 and was replaced by a frame building in 1910. The school was 0.75 miles (1.21 km) north of the store. 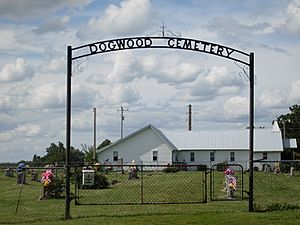 All content from Kiddle encyclopedia articles (including the article images and facts) can be freely used under Attribution-ShareAlike license, unless stated otherwise. Cite this article:
Dogwood, Douglas County, Missouri Facts for Kids. Kiddle Encyclopedia.